A lot of people seem to think that with the introduction of Pandaren as the next playable race, World Of Warcraft has become too ridiculous. Cries of "Blizzard jumped the shark this time!" and "Pandas just don't fit into the game!" have sprung up everywhere that people like to complain. Which means across the entire internet. 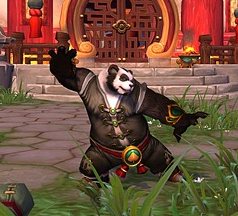 Those people are even more wrong than usual.

It's not that giant pandas aren't stupid. They are absolutely 100% dumb, in the exact same way that World Of Warcraft is and has always been dumb.

This is the game where walrus men give quests to cow men, where space goats battle against giant moths, and where wolf men shoot themselves out of cannons onto the decks of undead pirate ships. For those who may not have been paying attention, World Of Warcraft has sort of been full on stupid since the beginning.

Which is good, really. Have you seen Blizzard attempt to be serious, with their large angry dragons and ancient evils and CORRUPTION? Hoo boy. How about the StarCraft II story, which was only memorable due to the level of detail in its cutscenes and the amount of unintentional humor present in its earnest melodrama?

We're better off when World Of Warcraft tries to be a little more lighthearted, fantastical, and fun. The game is at its absolute best when it embraces the qualities that make it an explorable amusement park.

That's not to say that Blizzard can't screw up the light stuff. How many "jokes" in the game are simply references to real life or pop culture, with a few letters in a name rearranged? That stuff is abysmal, no doubt. The game would be far better without it. It is also incidental - the low effort byproduct of a healthy, upbeat approach to creating tons of weird content for a humongous game.

I'm not ashamed to say that I will absolutely resubscribe to play a big old fat panda monk. I will sit on a flying throne powered by a goldfish. I will zip around hackneyed fantasy China, weaving between pagodas on a continent that rests on the back of an incredibly stupid space turtle. I will hope for the most outrageous and unrealistic armor, with clashing colors, shoulder pieces the size of cars, and glowing laser belt buckles.

I will have fun with this silly shit because for all of their faults, Blizzard knows how to create locations that are a joy to explore and how to populate those areas with activities that are way more enjoyable when you embrace the dumb side.

Battlefield 3
For all of EA's stupidity and the misguided Call Of Duty knockoff campaign, this is by far the most insane fun I have had in a multiplayer game - even if I am the worst FPS player in history. 10/10

Dance Central 2
As Harmonix created two of the only reasons to own a Kinect, the rest of the industry was apparently lost in the infinite expanse of Ghost Recon's virtual gun-o-sphere. 8/10

Uncharted 3: Drake's Deception
A lateral move rather than a huge step forward like the transition from Uncharted 1 to 2, but if you subscribe to IGN's "blow you away" rating system (and really, who doesn't?) then you should think of it as knocking your face sideways rather than blowing it completely off your skull. 9/10

Ratchet & Clank: All 4 One
Once they figured out how to put Ratchet and 3 other players in a Ratchet-ish environment with the ability to walk forward while attacking, the game probably went directly to the manufacturing plant. 5/10