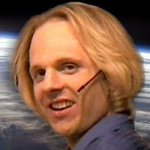 Given that there are only 28 months or so left until EVERYTHING CHANGES, I guess there's no time like now to start burning off all the 2012-related Awful Link submissions. Divine Cosmos contains "thousands of free pages of scientific and spiritual information about soul growth, Ascension and the evolution of consciousness," all written by David Wilcock, "professional lecturer, filmmaker and researcher of ancient civilizations." He's also the director of "upcoming Hollywood film" Convergence, which, unlike most upcoming "Hollywood films," boasts no evidence of its existence on IMDB. You can, however, find Wilcock there, due to his appearance in the clearly scientifically sound SyFy documentary 2012: Startling New Secrets. And you can sift through a ton of Wilcock speeches regarding 2012 on YouTube, like this one, which conveniently comes with a Nine Inch Nails backdrop and Polish subtitles.

Back to the site: "David's blog" proves Wilcock is a real, rounded person and not just a tunnel-minded prophet of the impending life-changing annum. "This is wholly and solely a personal update," he writes. "There is no 'information' about global events; no links, no politics, no insider disclosures." What topics does "off-duty" Wilcock address? Back-to-back subheads deal with "navigating the crevice" and "healing my shoes." Also, share in Wilcock's sense of achievement and wonder during this fascinating story about how he identified his airline gate using ONLY HIS MIND:


We had to find that gate. Time was of the essence.

There were almost 50 different gates, and no way to know which one it would be. Obviously there was quite a walk to get through all the corridors.

I knew I needed help. I turned within and tried to psychically determine which gate it would be.

I followed all the protocols I co-opted from Harold Sherman's ESP book, my research into remote viewing, the Seth books and the Law of One. I got to a very clear space, and the number that came back was '36.'

In that moment, I opened my eyes, and said to Kevin very confidently, "It's Gate 36. That's where we have to go. That's where our flight takes off from."

Then, hedging a bit as I became more conscious, I said, "If it's not 36 it's going to be right around that same area."

As we walked up to Gate 36, it was now 10:20 AM. They had literally JUST opened the gate for the next flight. There in big letters were two truly delicious words: The Angels.

It was the right airline. The right flight number. It was our flight! Gate 36 was RIGHT!

I got so excited by this very practical and useful psychic hit that I literally jumped up and down and gave Kevin a high five! We both yelled with amazement and relief. We now had the very first crack at getting the seats we really both needed to be comfortable!

I walked up to the woman at the desk and told her what had happened: "I know this is going to sound hard to believe, but I tried to guess psychically what gate we were flying out of. Otherwise we would both have to sit in terrible seats. I guessed Gate 36 before it was ever even 10AM, and by God, here it is -- Gate 36!!"

Elsewhere, Wilcock's Online Store gives equal weight to life's eternal questions: "What Is My Purpose?" and "Lost Your Password?" You can also check out "David's Links of the Day," which not only gets updated somewhat more frequently than ALotD has been lately, but also comes with this sweet SHEEPLE logo!