Show Me: The Word of the Emperor of Xeresgate (Thanks, Gonzo!) 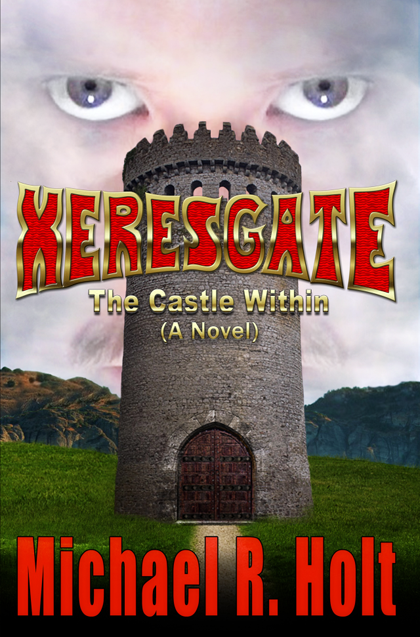 Let's take a moment to appreciate the little things about this beautiful cover, such as:

Author Michael R. Holt also answers to "Emperor Lu Bu," taking the name of the 3rd Century Chinese God of War in order to strike terror in the hearts of fellow cybertravelers. He recommends his masterwork as "something to read in-between Dagorhir battles." Dagorhir battles apparently involve nerds fighting each other with foam weapons. Hey, just like my nephew's birthday party!

Lest you question the Emperor's devotion to Dagorhir, take a peek at his book dedications:

Lastly, I want to thank my Father, Stephen, and my Dagorhir "Dad", Blackhawk

Oh, Foam Dad, you're just as important to me as Real Dad.

The preview warns "turn the page only if you're ready," so to make sure you're prepared for what's to come, check out this insane over-categorized list of tags. Wow, so many references to things! And those are just from the first 15 chapters!

With such a fertile imagination, Lu Bu's mind must be brimming with all kinds of thoughts on art. Well, maybe not. Pictures of dragons? Art. The Scream? Not art. Simple as that.

Perhaps he's focusing his brainpower on tackling religion. One of his pet projects is putting together an Agnostic Bible full of dumb, Internet-folksy commandments like "Don't be a dick," shamelessly cribbed from space nerd Wil Wheaton. In a break from the online intelligentsia's prevailing stance, he declares war on evolution, which he derides as guesswork:

17 - And if you're either religious or secular and smugly believe that your group alone has a grasp on what the absolute Truth of the human origin is, you're a jackass.

Ah, the South Park approach to theology: Both sides are smug and the truth is in the middle. Let's give this guy all the prizes for cracking the code!

Of course, everyone is just dying to know: Where does this foam LARPer dork stand on gender??? Well, for starters, he's that special kind of twerp who gets grievously offended by the "dopey dad" character in paper towel commercials. A year ago he compiled a list of GENDER TRAITORS, consisting of comedians who have betrayed their manhood by committing the ultimate sin -- making men the butt of a joke. Et tu, Louis C.K.?

Now, don't get the wrong idea, Lu Bu doesn't hate women; he just thinks they comprise an inferior gender that's only good at things like "childbirth" and "mental terrorism." In his world, there are two types of women, ladies and bitches, and he only takes umbrage with the latter group. This guy is the Chris Rock of gender!

Lu Bu saves most of his venom for these truly deserving targets:

Yes, he wrote a whole post ranting about "D-Lickers," those "WordPress assholes" who "superficially click the Like button," thus committing what his paranoid mind perceives as a heinous act of treachery. I'm really starting to think this guy's taken a few too many foam swords to the head.