Epic Games (thanks eightcell) - eightcell on the Something Awful Forums recently posted a thread about a Gears of War doll his friend made for his cousin as a Christmas present. Well that was too much for Epic Games, who sent him a cease and desist letter. 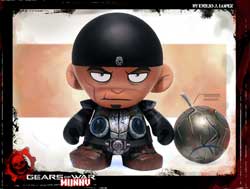 Accordingly Epic may seek injunctive relief against and recovery of its damages from you.

Therefore, we request that you remove the Epic trademarks from the doll, the packaging for the doll, and the website, and cease all further use of the Gears of War trademarks in connection with dolls, their packaging, your website, or otherwise.

I guess what this guy has to do now is go to his cousin, ask for the gift back, scratch off all the logos off it, and then give it back to his cousin. Great idea.

Welcome to the world of in-house legal counsel, sending out hilariously retarded legal threats to people since the dawn of time. Overpaid and under worked, these guys have to at least look like they are doing something that has anything to do with the law.

Epic has a right to protect their trademarks, but against a guy who made an awesome gift for his cousin? It isn't like he's mass producing the things and selling them. And if he is sue the hell out of him. This crap just makes Epic, an otherwise awesome company, look bad.