THE NEWS MAGAZINE OF THE COMPUTER SCREEN, VOL. 7 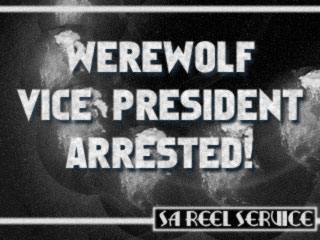 After a long and arduous journey into the heart of deepest Africa, millionaire industrialist Arthur Trueblog has placed the elusive werewolf that has been terrifying African villages under citizen's arrest! The werewolf, formally American Vice President Stuart P. Thornbuckle, abandoned his position to spend more time terrifying the innocent with his sharp fangs, imposing claws, and intimidating roar!

"The werewolf, though fierce and cunning and determined to keep terrifying people," commented Arthur Trueblog, "did not attempt to fight the arrest. I think he knew it was coming, and was relieved it was finally over with."

The werewolf was turned over to Central Booking in New York City, where it faces a bevy of charges from mauling to disturbing the peace.

"It should be noted," spoke Lester Lawblight, the werewolf's lawyer, "that the vice president has nothing to do with these actions. He is no more in control of the werewolf than you or I."

What strange twist in the laws of magic enabled the werewolf to persist past the full moon is currently being investigated by a team of magicians and scientists.

"So far we have determined that some of the werewolf genes mutated," said an excited scientist, so full of pride in his diligent work. "As a result, the genes were no longer responding to the subtle pressure changes exacted by the moon. We had some specifics, but those damn magicians made our findings disappear!"

"Poof!" said a magician, who pulled a tiny car out of his pocket that was once a full sized car belonging to the scientist!

Meanwhile, Congressman Applebarrel P. Funbucket introduced articles of impeachment, intending to prevent the werewolf from doing any further harm to the country.

"May the reputation of America never again be sullied by werewolves," spoke the plucky congressman with a heart of gold and pocketful of special wish-granting beans. This humble reporter can't help but agree! 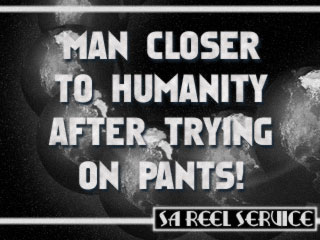 Lonely and haunted by a purposeless existence, a nameless man tries on pants at a thrift store in the abandoned city of Chicago! He has lived alone without human contact for over three decades, each one more toilsome and wretched than the last! The nameless man, so detached from the familiar human experience we all know and love, does not even know how to wear pants!

The man, hairy and disheveled, attempts to force his bearded head through a pant leg, ignorant of the tried and true "one leg at a time" method developed by his long lost ancestors, taken at once from the Earth in a brilliant flash of light!

His nose, keen at recognizing animal scents, notes the unique smell of the pants. They are soaked in the odor of an animal new and alien to him, but known well to us! He gathers all the pants in the store he can carry, intending to take them to his makeshift home to cook for dinner before the sun gives way to the nightly reign of beasts!

Let's hope those pants give him a leg up!