Living with HipsterGirl and GamerGirl

Much like the Betty/Veronica paradigm, you're either a HipsterGirl or a GamerGirl. The webcomic Living with HipsterGirl and GamerGirl, which blends the look and humor of Ctrl+Alt+Del with the titillation of Three's Company and social insight of 9gag, should help you figure out where you fit on the spectrum.

HipsterGirl is based on the author's nebulous concept of a hipster, which is apparently just "someone who owns an iPhone." Finally, someone on the internet who has the cajones to stick it to Apple users!

GamerGirl is the idealized "manic pixie dream girl" of gamer webcomics: a sexy, sassy real gamer who tells off fake gamer girls for their egregious cosplay fails. (Also, you never see her whining about death threats.) Tellingly, she was literally introduced with her breasts exposed, which led to some outrage... when the artist later decided to censor it:

Most comics feature HipsterGirl and GamerGirl lounging around in their underwear or sometimes in their strange magic pants that appear to be constantly falling down in slow motion, much to the chagrin of their skeevy-looking male roommate, who hilariously has to strap himself down at night to keep from molesting them. Despite the presence of such strong, fully-realized female protagonists, the comic occasionally gets a bit of flak from nagging feminists. If only more women could be like this commenter: 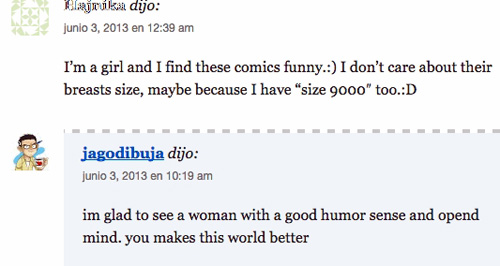 After 170+ installments, you'd think the winning formula of "boobs + video games" would be wearing thin, and you'd be right. Nevertheless, the comic still racks up the likes when the latest strips are posted on MemeCenter, a leading online emporium for bottom-barrel meme garbage. There's also some extra-spicy bonus content like this handy breast comparison chart, which finally - finally - sets the record straight on who has the bigger bust. (Spoiler: It's HipsterGirl.)