The Fabulous Fables of Groggery Gibbonman

During the tumultuous Jacquelinian era, no fabulist or faerie-tailor was more esteemed than Groggery Tirade "Grog" Gibbonman. From his famous home at 359 ½ Fourthpenny Avenue, London, he penned more than 7,000 short morality tales in his lifetime, many of them wickedly scathing in their derision of ... something. 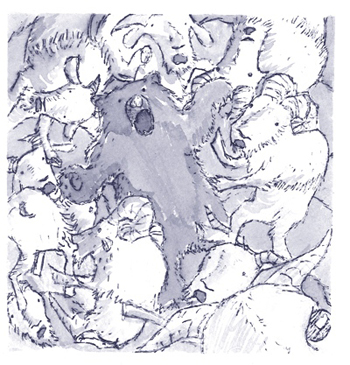 On the high steppes of a foreign land, a stout and formidable bear chased a bantam billygoat for his supper. Though the bear was a sovereign beast indeed, the billygoat evaded him by a sliver, and darted to sanctuary in a small cave.

The bear, not one to be so easily escaped, followed the billygoat, and once inside the cave he discovered a multitude of goats much like the one he sought.

"We have you now!" laughed one of the goats, though the bear could not tell which. "Now you do not know which of us is the one you chased here! You are bested!"

"The joke, I fear, is upon you," replied the bear as he looked around the many-goated chamber. "I don't care which goat I eat, and now I know where there are many more for tomorrow!"

The goats began to panic and jump about, and given that they numbered nearly a thousand, they quickly became a maelstrom of frenzied horns and hooves.

"How the hell are you all living in here!?" bellowed the mighty bear, as thousands more goats poured through the channels of the chamber and joined the fracas madly. "Good god, this is a ridiculously large number of goats!" Soon the bear was buried in the struggle as the terrified goats thrashed pointlessly in their throngs.

The moral of the story is: Don't put all the goats that ever existed in just one cave. 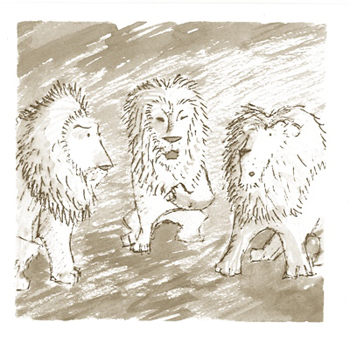 It was in the blazing days of the most despotically calescent summer any soul could remember that three lions, their efforts at hunting made futile by the heat, came across a barrel left derelict in the savannah. Hungrily, they began to wonder what was inside it.

"Certainly" said the first lion, the strongest of the three, "it is a barrel of chickens, upon which we may sup."

"That is ridiculous!" rebutted the second lion, the wisest amongst them. "No farmer has ever shipped chickens in a barrel! It is most definitely a barrel of spiders, which will provide no nourishment at all, and will instead bite us mercilessly upon opening!"

"Indeed!" chimed the third lion, the most cautious of his fellows. "It couldn't possibly be ... wait, what? Spiders?"

The third lion looked about confusedly. "That makes even less ... hold on, how the hell do you know anything about how farmers ship things? You're a fucking lion!"

The second lion, made nervous by his companion's new suspicion, turned his tail and ran, and the remaining two devoured the barrel's contents voraciously.

"I told you it would be full of chickens," said the first lion.

The moral of the story is: A barrel of spiders and a barrel of chickens weigh the same. 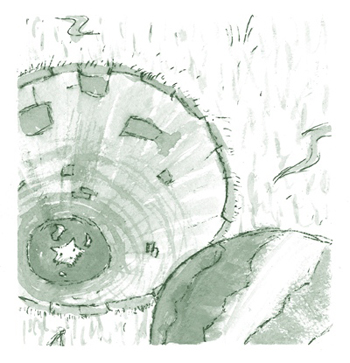 In a melon patch near the venerated walls of an olden-times city, a fox was walking one evening. Unbeknownst to him, the patch contained a well whose stones had long since been scattered and whose opening had been obscured by vines, and before he could leap away from danger the fox fell in.

Trapped in the water at the bottom of the well, the fox cried out for help. One of the many nearby melons rolled to the edge of the well and called down to him: "Don't you wish you could eat me, a succulent and ripe watermelon? I am so juicy and delicious, 'tis a shame you are trapped in a well!"

"I'm a fox!" cried the fox as he sputtered and splashed in the water. "I eat meat, not fruit! I didn't even think of you as food when I saw you, like, thirty seconds ago! Can you get me out of this well?"

"Fine then!" chided the watermelon. "My flesh is sour anyway! Harumph!"

"I don't know what that means!" coughed the fox. "Again, I eat meat, not fruit! I'll even eat rotten meat, so taste is not really something I consider! Also, I am FUCKING DROWNING!"

"The moral of the story," said the melon with no small pomp, "is that it is easy to hate that which you can not have."

With that, the fox slipped beneath the wellwater's surface and died.

The moral of the story is: Since when can melons talk? I mean, we've established animals can, but that's weird.

You can read more of Ian's writings regarding pygmies, toys, and the strange weather of the North Indies here.