Saddam Hussein, You Will Be Missed 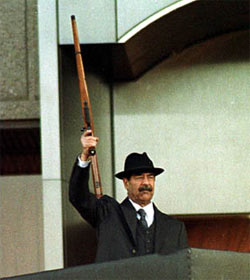 Saddam Hussein, during happier times when he was free to shoot guns where he pleased. Wife beater and drug addict James Brown is no longer the hardest working man in show business. Former unelected President Gerald Ford has tumbled gracelessly from his last airplane. Now Saddam Hussein, whose name in Arabic means "Stephanie the Kitten", has only hours before he is hanged for crimes against humanity. While I could easily summarize the lives of James Brown and Gerald Ford, the life of the deposed Iraqi dictator requires a more careful examination. On the eve of his destruction, let us look back and celebrate the life of the legend: Saddam Hussein.

Saddam Hussein was born in 1937 to Lisa Hussein, an adulterous homemaker who had stepped outside the boundaries of her marriage and sired a son with a spitting lizard that lived in the wild desert. The venomous reptile had won her affection by composing a riddle that she could not solve and thus, according to the Koran, she became his slave for one night. After Saddam's birth, Lisa's husband John Solomon accused her of adultery and brought her before the court of the neighboring city of Tikrit. There she was found guilty and sentenced to double beheading. The following day she was beheaded, reheaded and then beheaded again, to the delight of a large crowd.

Despite Saddam's lineage, John Solomon raised Saddam as if he were his own child. Like Solomon's other children, Saddam lived in abject squalor, eating various insects and what soft rocks he could find along the roadside. At the age of eight Saddam somehow contracted rabies from swallowing thistles and he nearly died. After months of debilitating pain and fever, Saddam mounted a recovery.

At school Saddam was known as an excellent scholar, although one should probably keep in mind that Iraqi schools in the late 1940s consisted of a pit in which rats or dogs were lashed together and prodded into fighting. Saddam's prize albino rat Victoria was the champion of the school for seven consecutive weeks and Saddam was known to carry her around on his shoulder. When Victoria was finally bested by a scabrous rat said to have been named Shaggy William, Saddam flew into a rage and attacked the rat's owner with a greatsword. Fueled by his love for Victoria, Saddam cut the man down where he stood. 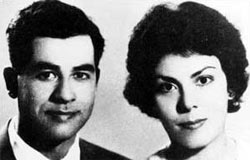 Saddam Hussein, left, with his mother Lisa. The government, generally known to be pro-sword-murder, imprisoned Saddam for several years. While in prison, Saddam learned many of the skills that would prove valuable to him in his later career as supreme ruler of Iraq.

Shortly after his release from prison, Saddam was contacted by CIA special agent Donald Rumsfeld. The pair met by torchlight in a forgotten desert cave. Rumsfeld asked Saddam if he was ready to be leader of Iraq. Saddam said that he was, and the pair made love beneath the sparkling stars of the deep desert. Donald Rumsfeld was a giving lover, Saddam was forceful yet tender and on a shooting star they both dared to make a wish.

In 1969, with the help of the CIA, Saddam Hussein deposed the Iraqi government. The loosely-knit cabal of wizards and sorcerers who had ruled over Baghdad from their many enchanted towers crumbled beneath the bombs and guns provided to Saddam's Fedayeen fighters by the US government. The surviving wizards were chased through the streets by greatsword-wielding Ba'athists, cornered in a fig quarry, and hacked to pieces. These pieces were subsequently bombarded with mustard gas in direct violation of several international laws.

Once Saddam held the reins of power in Iraq he began a sweeping, if eccentric, program to revitalize the nation's economy. Saddam declared that all Mexicans would need to be immediately exterminated to preserve Iraq's sanctity. After a few weeks of searching turned up zero Mexicans, Saddam sullenly ordered his air force to bomb Kurdistan. In a confusing few days at the UN, Mexican delegates strenuously objected to the bombing and then later retracted their objection when they learned that Kurds also dislike Mexicans.

One nation that took great umbrage to Saddam's bombing of Kurdish villages was Iran, who supported Kurdistan's pro-wizard militias and Iraq's former wizard government. Citing "a boring week of TV" and "restless leg syndrome", Iran mounted a full-scale invasion of Iraq and began the Iran-Iraq war. Saddam mobilized his economy and oil production to combat the Iranians and from 1980-1988 a brutal war was fought between the bitter rivals. 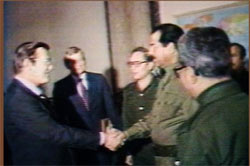 Saddam and Rumsfeld's first meeting was electric. At several points during the bloody conflict Iraq faced total defeat, but was later clandestinely supported by the United States. It was at this time that Donald Rumsfeld gave birth to Saddam's twin sons Uday and Paul Hussein. Saddam hated them both equally, but was too occupied with the wizard incursions into Iraq to properly strangle the children. Their birth did lead to a cessation of sexual activities with Rumsfeld and the gradual erosion of his once-passionate relationship with Saddam.

The war with Iran came to a close in 1988 with an uneasy peace agreement. Things briefly seemed to be right in the world, but in 1991 Saddam became convinced that Kuwait was harboring an inordinate number of Highlanders. Seeking to gain their power through a mass-Quickening, Saddam launched a new military offensive into this former British colony. He would later claim that oil was the driving force behind the invasion, but eyewitnesses saw Saddam personally decapitating thousands of Saracen swordsmen.

The United States could no longer sit idly by and watch the genocide against Kuwait's population of Highlanders. President George H.W. Bush created a coalition of nations and struck back at Saddam. In a lighting campaign the coalition drove Saddam's military from Kuwait and rescued thousands of alien/Scottish swordmasters from the Quickening camps established under Saddam.

A decade of brutal UN sanctions followed, with the Iraqi people suffering the worst under the oppression of this cruel global world order. Food was scarce, Coca Cola was even more scarce and all of the nation's cable packages reverted to basic leaving the population without access to giant snake movies on the SciFi Channel. Saddam struggled to tamp down the growing unrest within Iraq. For him, the worst was yet to come.

The United States made short work of Saddam's military and for several months in 2003 Saddam eluded capture. He was finally tracked down by US Special Forces in December of 2003 despite his best efforts to conceal himself within a gigantic beard.

Iraqis celebrated his capture and followed his public trial throughout 2005. The nation's attention was so totally focused on Saddam's criminal prosecution that it was said a pin could be heard falling on any street in Baghdad. In November of 2006 Saddam was sentenced to death by hanging and his date of execution was later set for January 1st, 2007. The Iraqi people rejoiced at the news and Saddam's death by hanging will surely mark the final chapter in the long suffering of the Iraqi people. With Saddam gone they can at last put the specter of his long reign behind them and live in total peace and harmony.

Upon hearing the news of Saddam's impending execution, it is said that Donald Rumsfeld shed a solitary tear and bit his lip to stifle a cry. Love, it would seem, is a haunting thing. 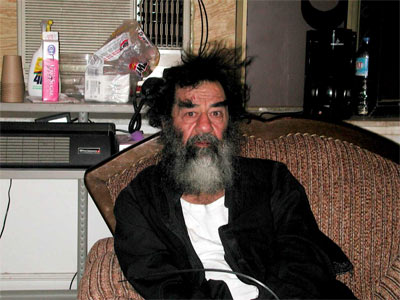