In 2007, James Cameron produced The Lost Tomb of Jesus, a documentary that purported that bones found inside long-buried caskets belonged to Jesus, his wife and his child. "I'm not a theologist. I'm not an archeologist. I'm a documentary filmmaker," he said at the time. (People who were theologists and archeologists vehemently disagreed with Cameron's conclusions.) Back then, "Randy Senior, USA" wrote "I wonder what is real reasons for this production. What is he afraid of?" A recently created Web site posits that James Cameron would have good reason to make people believe their messiah was dead, so he could make movies in peace, for he is, in fact, Jesus Christ.

Given the freakish devotion displayed on Avatar forums, it's not difficult to imagine fans genuinely worshiping Cameron as a divine figure. And this might well be happening, on some other site. But James Cameron is Jesus Christ is just a shitty joke. You might be offended, if you're averse to seeing Photoshopped sperm splattered across the face of Kathryn Bigelow, or if you're one of the eight remaining people who observe the Name in Vain commandment with grave seriousness, or if you're outraged whenever you encounter terrible jokes and lame image macros. Seemingly pointless as it is, James Cameron is Jesus Christ could serve a couple valuable purposes. it could be a bellwether for cultural priorities, based on the proportion of irate believers to pissed fanboys, and it could reveal a lot about the intelligence of Internet users, based on the percentage of people who find it funny on any level. 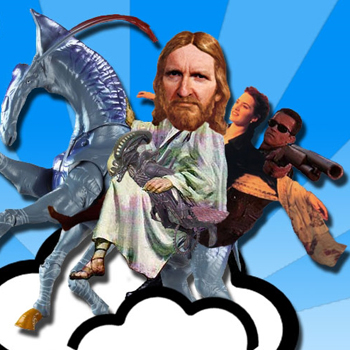