Bookworld with Brendle: George R.R. Martin's "A Guild of Men" 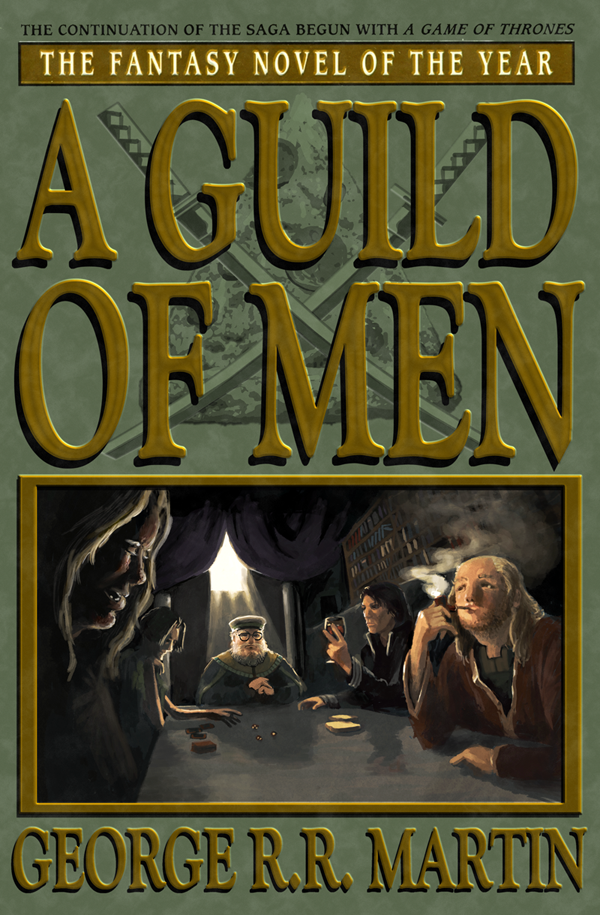 With all the well-deserved buzz surrounding HBO's first season of Games of the Throne, it's no surprise that everyone is very excited about author George R.R. Martin's announcement of his next novel, A Guild of Men. Abandoning the oft-criticized waits between books, Martin is kicking it into overdrive, with A Guild of Men expected in Summer of 2021.

I had heard rumors that they lived in a remote citadel, cut off from the outside world, having forsaken their ties with their fellow men, having refuted the promise of women, living in stark dedication to the study of their sacred texts.

The difficult journey here exhausted me. I rode heavy in the saddle and my eyes squinted of their own volition when a stray sunbeam would cut through the forest canopy and briefly enter into my eye. When my eyes readjusted to the dark, the great stone fortification seemed to have appeared right in front of me. The intimidating, bulging walls, sheer and overgrown with moss, belied the cerebral work carried on within. Here they, Tometalkers they are called, pored over the stories and myths that shaped their lives, unconcerned with the machinations of civilization, which were to them insignificant, fleeting phenomena.

It was here that my brother, Alfredoff, had sojourned, drawn by their texts, drawn away from his friends and family, from his future. He had steeled his resolve, assured that this was his path and that here there were others like him. But why had I come here? Was it to join him ... or to bring him home?

But Martin wastes no time in turning the lives of these seemingly simple men upside down. When an initiate, the young Vitus Eirrell, begins to question their practices, their fundamental ideology, in order to draw his brother back into society, the rest of the guild members know they must defend their beliefs and practices, or risk altering their whole way of life forever. In this passage, Vitus interrupts a formal debate, asking the Forbidden Questions and angering the Guild Elderrs:

"And so it is, as I have stated, that the quests of the Ancient Ranger Arrgorrna cannot possible compare to those of the great House of Tarrks. The nigh poetic prose of the second prophet easily outweighs that of the first, who was so unfortunately focused on building languages and histories. I have read all of the ancillary texts, including some very hard to find original drafts, sacred to our guild, that have led me to believe in the second prophet's superiority to the first," Elderr Gutlon said with a quiet confidence. His venerate hands stroked his beard. He gazed intently at his fellows and casually popped another of the cow-milk crackers into his mouth. Without pausing to chew, he continued, "Anyone who denies the greatness of the second prophet is a fool. Much like Pra'axtan, the Bastard Half-King, once he fell under the curse of the Northern Specters and became Garnoth, the Destroyer: brainless and slavering."

Applause filled the hall. I could barely follow the conversation, so rich in allusion, so meticulous in detail. The years of sole dedication to this enterprise shone through in the authority with which they spoke. Their eyes were as hard as stone, well-adjusted to the dark, to the discourse, though they had long since forgotten how to be well-adjusted within society. Then another Elderr raised his hand and took the floor. The debate would continue.

"I believe the prophets are equal, Elderr Gutlon," Elderr Elaze retorted. "There is as much to be gained from Arrgorrna and the quest for the Ring as there is from the tales of Tarrks and the Wall." The two men gazed intently at each other, their ire rising. Elaze continued, "You may think of those who hold in higher esteem the far more learned texts of the first prophet to be comparable to Garnoth. But if that is so, might I offer you the advice given to the Oldeth people upon Garnoth's arrival at Minet Sp'Oldex: Stay out of his way." More applause. Elaze lifted his goblet of syrup and mockingly toasted in Gutlon's direction.

What were they talking about? I had been here for weeks. My brother hardly paid me any attention. We've been round and round on these same topics, over and over, treading and retreading the same barren land. This was madness!

It was then that I spoke out of turn, drawing silence and attention from the guild.

"What does it matter, gentlemen?" I asked. A collective gasp could be heard echoing around the walls. "I came here because I enjoyed the writings of the sacred texts, because I chose to see if I could find within them that which I could not find out there. I came ... to find my brother. But so far it has seemed to me petty squabbling, semantic pedantry, and utter disregard for the reality that exists beyond these walls! I understand that this order has tradition and that isolation from the rest of the world is a necessary step in devoting one's self to any serious enterprise, but is it worth it? We have given up everything - our friends, our families, our futures. Not a single woman steps foot in these halls, nor will they, ever. Gentlemen, should we not find a way to incorporate our love for these books into a life of involvement? Must we choose one or another?"

Elderr Gutlon rose violently, his large frame towering over the seated brethren. "How dare you, Vitus. How dare you, who has yet to earn a single "R" in his name, who has not even completed his study of the ancient works, and can hardly quote from them by memory, judge us? Friends? Our friends live through the sacred words. Our families are the families of their heroes. Our futures are guaranteed - a tranquil life of happiness immersed within the beautiful world the prophets created. And you dare speak of women? I question whether you have even read the sacred writings at all. Know you not that women are a burden or a danger to men and nothing besides? We have all seen how the sacred heroes handle their women, how they must guide and control them. You want to bring their weakness and evil into this citadel? Fool."