Redpilled My Little Pony Headcanons combines all the worst things about the modern Internet: Tumblr, fandoms, bronies (creepy dudes obsessed with a cartoon for preschool girls), redpillers (creepy dudes who think they are cool guys similar to Neo from The Matrix because they can see through the facade of feminism and political correctness), heavy-handed trolling, and headcanons (fanfiction without the effort of writing fanfiction). 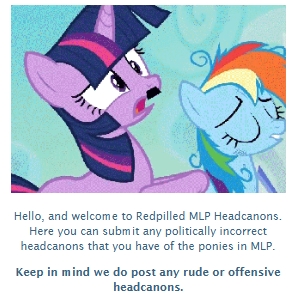 A major theme of the blog is white pride, what with its white-pride background and seriously twisted headcanons like "Fluttershy is an ex-Nazi princess" and "Celestia is actually Hitler in disguise." Holy crap... did they just say Hitler... on the Internet?!

Naturally, this obtusely ironic blog gets its fair share of scorn from outraged parties, allowing the head headcanonier to showcase his trademark wit. Sometimes the complaints aren't what you'd expect:

Hey, implying Scootaloo is a failed abortion is far less offensive than implying any of the ponies are christian/jewish/muslim/any brand of creationist retardation.

The most controversial post thus far is one simply claiming "Rarity is totally straight," which apparently caused quite the kerfuffle on a pony image board. Sometimes you gotta go with the subtle approach.

I wonder if Hasbro executives ever see stuff like this and regret what they've inflicted on the world, like Oppenheimer and the atomic bomb. That is, when they're not swimming in their money vaults Scrooge McDuck-style.