PLANET CHURCH is a cyber church from the Geocities era that issues dire warnings of the apocalypse. The site is run by Reverend Kevin Wilson, who seems like a nice enough fellow:

We thought a face to go along with this site would hopefully de-mystify the ominous and scary nature of this web-site. The future will be incomprehensibly scary if you don't know Jesus Christ, but we hope you think us not a band of monsters for loving you enough to tell you so! I am the pastor of a church. Denominationally it is a Southern Baptist Church (Same as Billy Graham). You don't find any of us in prison or scandal: we have our heads on straight.

For a guy who runs a church in cyberspace, Pastor Wilson can be pretty paranoid about technology. He's wary of barcodes, and he believes the end of the world is looming near because of ... ATMs?

At no other time is earth history did the technology exist to fully digitize currency, universalize said currency and control its distribution and transfer on a global scale. 666 will obviously and eventually replace for instance the PIN. number to access an A.T.M. When biometric technology becomes the norm relative to the accessing of accounts and services, Anti-Christ will most likely require the 666 prefix to access moneys and services as a sign of allegiance to him. With the full implementation of biometric technology, no other numbers will be required to access and distribute moneys. Refusal to receive his mark will result in a denial in the ability to conduct even the simplest form of activity and will render you an enemy of the state.

Sure, the Anti-Christ thing sounds bad, but consider how incredibly convenient it would be if you had to use the number 666 for everything. No more hard-to-remember passwords! 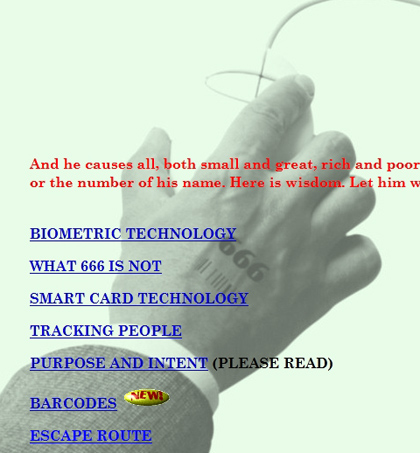 'The Mark of the Beast is nowhere on the planet available today in any way shape or form; so don't be deceived. You'll know it when it gets here.' Phew, that's a relief!

So, technology is bad, but sometimes science is good, like when it helps prove the Bible is real. Just look at this unsourced graphic, which offers incontrovertible evidence that the Earth is only 6,000 years old because something something centrifugal force. Take that, uniformitarian geologists!

Now for the main attraction: a multimedia tour through Hell!!! Well, it's not really much of a tour per se, but there's an embedded audio file from the Art Bell show. Apparently someone managed to smuggle a tape recorder into Hell. I guess the underworld has about as much security as iCloud.

Still not convinced Hell is real? Well maybe this spooky anecdote will send chills down your spine:

"Each time he regained heartbeat and respiration, the patient screamed, 'I am in hell!' He was terrified and pleaded with me to help him. I was scared to death. . . Then I noticed a genuinely alarmed look on his face. He had a terrified look worse than the expression seen in death! This patient had a grotesque grimace expressing sheer horror! His pupils were dilated, and he was perspiring and trembling - he looked as if his hair was 'on end.'"

A dying man was screaming and looked terrified??? You don't say.

You'll definitely want to keep checking back to PLANET CHURCH for their upcoming material like "HEAVEN: ULTIMATE REALITY," which has been "COMING SOON" for the past fifteen years. Here's a grim prophecy that will surely be fulfilled: The apocalypse will come before that page is finished.