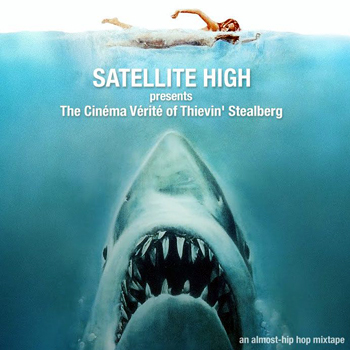 Apologies to anyone who clicked this link expecting the usual terrible GeoCities-esque site about sexy elves or whatever, but today I'm going to use my annual "something awesome!" exemption to showcase Satellite High's new mixtape, The Cinéma Vérité of Thievin' Stealberg.

If you aren't familiar with Satellite High, he makes rap music and also jokes, and he's really good at both things. For this mixtape, he decided it would be more fun to stick the two together and let them balance each other out. It worked really well! Also, instead of making an album of straight hip-hop songs, Sat High (Heezy to his friends) tossed other types of cool stuff in there too, like a grindcore song about the system and some hair-metal-style dangerous rock. And did you ever hear "Alvin Greene is on the Scene" ? Well, that was him and that song's on this tape, along with a ton of other things I think everyone who reads this site would definitely like. Plus, it's free! Seriously, it's a full hour of really good music and actual funny comedy and I'm not sure why you haven't visited the site and downloaded it yet!