FAT WORLD Wiki is a much-needed guide to the biggest movers and shakers in FAT WORLD, an alternate-reality universe where most women are immensely obese. FAT WORLD's creator, fan2000, has crafted a surprisingly elaborate historical timeline that thoughtfully explains how fatness, once reserved for Sumerian royalty, became achievable for the average woman. 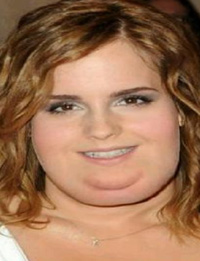 Naturally, this is all pretense for a bunch of poorly photoshopped fat morphs of female celebrities for the benefit of hog-pounding perverts. There are nearly a thousand of these grotesque creations, ranging from actresses, musicians, "chunky athletes," Internet celebrities and WWE divas. (Speaking of which, WWF never purchased WCW in FAT WORLD. It just wouldn't be a perfect utopia otherwise!) 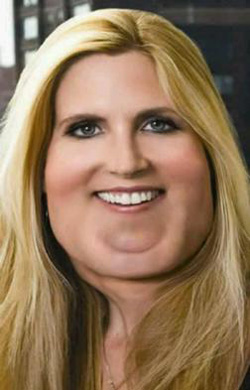 Most of the celebrity biographies are essentially what you might find at IMdB, appended by an additional line like "She currently weighs 450 pounds and plans to gain more." However, some celebrities have life stories that diverge from the real world in weird and dramatic ways. For example, the FAT WORLD version of Taylor Swift settled down and married an equally fat Taylor Lautner in 2012:

To go along with the shift in Musical aspirations, Swift and Lautner also celebrated together the milestone's of cresting 500 pounds, followed quickly by 550, and currently working on getting her past her current weight of about 580 pounds to 600, which is sure to be more of a challenge once she embarks on the "Red" World Tour later this year.

The most famous celebrity in this fat fetish fantasyland is Anna Nicole Smith, who is not only still alive but also weighs in at a queenly 1300+ pounds. A triple threat at four digits, the actress/model/singer topped the charts with her cover of Weird Al's "Fat," which presumably became the national anthem. 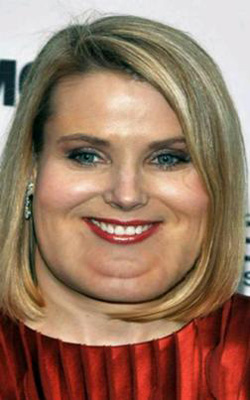 Sadly, Jessica Simpson never became a celebrity in this universe thanks to the infamous "Weight Inflation Trend," which left her and her sister Ashlee immobile. This is considered a cardinal sin, as fan2000 explains:

In FAT WORLD, a woman becoming immobile and bedbound (except in the case of pregnancy) is a cultural taboo and literally a career killer for a celebrity. To fully explain would take a seperate page to cover the topic.

Apparently, it's possible to be too fat for FAT WORLD.