The creator of the Poser art character Xalynne Blackblade cautions visitors that Xalynne.com contains "skimpiness and full-bodiness," without being considerate enough to clarify that the distended, vein-streaked breasts on display resemble rotten onions. Of course Xalynne, like most such sites, contains offenses more egregious than mere nudity, accessible by clicking on the phrase "ZOMG! WTF PRON?!?", which in itself serves as the strongest possible "turn back!" warning to those with an aversion to idiocy. A follow-up disclaimer details specific atrocities, including "monster sex" and a pregnancy fetish. Somehow, the actual images are even worse than that description suggests.

Xalynne originated as a 235-pound WoW character, envisioned by her lifegiver as a "MILF turned mercenary," an already dubious concept that somehow degenerated into "she'll have sex with anything with a penis (or penis-like appendage)." So the gallery includes lots of "fuxxoring of orcs," plus "spider rape" and "puppy birthing." For those who grow tired of/nauseated by Xalynne, there's Outpost 24, a series that has allegedly "become popular and large enough in its own right to warrant a separate section." This sci-fi story about four women assigned to guard a storage depot explores charming futuristic concepts such as "Fuck-Toy 998" and "Cumdumpster Wednesday." 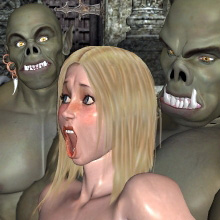 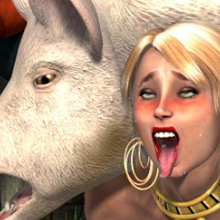