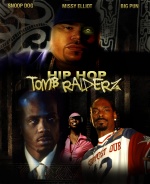 Plot Outline: "Indiana Jones" meets "Boys n the Hood" when five world-renowned archaeologists/hip hop moguls find themselves in a remote jungle palace for one final dig. After they find a stockpile of Incan treasure (and upset an immortal prince in the process) who should they fear more, the undead or themselves? (view trailer)

User Comments: An epic hip hop quest the likes of which we have not seen since "Soul Plane" (more)

Lead Anthropologist Gunther: Yo, dawg, get me my grappling hook. I got a mean-ass ghost nigga to kill.
Lara Inglewood: Phineas! Enough of this bullshit! You need to decide right now: are you a rapper or an archaeologist?
Professor Phineas R. Compton: You know that ain't fair, Lara. Rapping's my heart and archaeology's my soul. You kill one you kill the other, man.
Lara Inglewood: This isn't about heart and soul, Phin! You're great at both now, but if you focused on one you'd be a legend! Why you gotta have it both ways, man?
Professor Phineas R. Compton (cocking pistol): That's the way I roll, bitch.

King Huascar Myoatl: It's been years, Olmar. Decades since I've seen the sun. Centuries since I've heard about the world. How am I supposed to know what this "Tupac" is?
General Olmar Olatltan: I don't know, but this shit is fresh! (More)