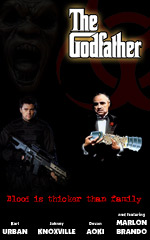 Plot Outline: Based on the hit Electronic Arts videogame for Playstation 2, Xbox and Xbox 360, the Godfather brings the pulse pounding action of urban combat to life. A SWAT team must face off against a shadowy crime boss and his deadly new street drug on (more) (view trailer)

Mario Puzo's The Godfather: The Movie of the Game (Based on a Major Motion Picture) (USA)
Oy, Fakken Abos Amok (Australia)

Michael "Lone Wolf" Corleone: (walks in) Damn it, Fredo, I told you never to talk to reporters!

Kay Adams: I'm Kay Adams from News 5, and you are...
Michael "Lone Wolf" Corleone: Throwing you out!

Brandon Marlo: Never let anyone outside the family know what you're thinking.
Michael "Lone Wolf" Corleone: Think about this! (enters bullet time)

Kay Adams: It'll take years to rebuild. We won, but at what price?
Michael "Lone Wolf" Corleone: We're tired of hearing it, Kay.
Sonny "Shakedown" Corleone: Everybody shut up and paaaaartyyyyy! (More)

its not the original so dont act like it should be, 8 September 2006

im more than a little ticked off readin some of the comments posted here...no, MPtG:tMotG(BoaMMP) isnt the original but when did they ever claim it was??? Godfather is solid classic Drama while MPtG:tMotG(BoaMMP) is an honest to goodness Fun Game Action you can enjoy if your willing to turn your brain off and have a good time...it even respects its roots and uses alot of things from the first movie in creative new ways, it ain't the best but it aint that bad deal with it haters!