The Terrible Truth About Dolphins 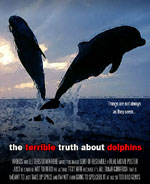 The Terrible Truth About Dolphins (2006)
Directed by:
Terrence Vizio

Plot Outline: Watergate or watery grave? The hidden politics of dolphins are explored in this hard-hitting documentary, with no punches pulled - especially those aimed at the gills!

User Comments: Dolphins do not have gills (more)

Gunthild Dolphinkiller: Every night... every night they come. You think Flipper's smiling at you, motherfucker? You think he's happy to be in that goddamn tank? No. He's... he's smiling because he's thinking. Thinking about sucking your mom's guts out through her cunt. Thinking about the day they leave his tank a little too open, just so he can clamp those fucking meateaters down on some little kid's face. Ever seen an eight-year-old girls' lungs, Al? It ain't pretty. Especially when a dolphin's blowin' 'em up like a big goddamn meat balloon.
Narrator: So... what do you think of the people who say dolphins aren't all that bad?
Gunthild Dolphinkiller (loading crossbow): Faggots. All of 'em. Dolphins won't eat 'em because they stink like patchouli and incense.
Narrator: Then why don't you wear patchouli and incense, too?
Gunthild Dolphinkiller: You callin' me a faggot?
Dr. Jerry Plankton (dubbed): Hoo-buddy! I sure is a dolphin-lovin' fagboat! Gimmie a dolphin so I can fuck him! Make sure it's a boy dolphin, too!
Al Plankton (dubbed): This 'ere biology degree only means one thing: I get paid thousands of dollars to fu-hu-huck dolphins!
Dr. Jerry Plankton: Uh, why isn't the microphone on? And why are you mumbling into that tape recorder?
Narrator: No reason. (More)