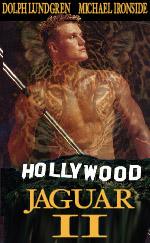 Tagline: The Jaguar is Back on the Prowl!

Plot Outline: The Hollywood Jaguar (Lundgren) returns from the jungles to Sunset Strip, where he must take down a drug ring led by the flamboyant Hector Flamingo. This time, he's joined by Cynthia Rothrock, a cross-dressing prostitute with legs of solid& (more) (view trailer)

User Comments: The last of the Hollywood Jaguar movies to feature Dolph Lundgren, and maybe the best of the series, save for director Mick B. Ruth's tendency to slather the proceedings in a musky wax of dripping, putrid (more)