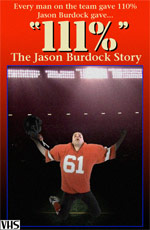 Genre: Sports / Drama / Fantasy / DRAGON FIGHTOL (more)
Tagline: Every man on the team gave 110%. Jason Burdock gave 111%.
Plot Outline: The autobiographical story of Jason Burdock's rise from obscurity to become an all-pro quarterback for Denver. Burdock battles and ultimately triumphs over a crippling injury that imprisons him in an iron lung, because the body may be in an iron lung, but the spirit can never (more) (view trailer)
User Comments: Basing a sports drama on the hallucinatory autobiography of an insane (and widely hated) football player in an iron lung and then claiming it is a true story probably wasn't the best idea to ever come out of Hollywood. But it's close. (more)

Jason Burdock: I'm the tiger that ate the lion. I have a lion inside me and I'm a tiger.
Goodfry Blackfriend: Hey, daddy-o, a cool cat in a cool cat is out of sight.
Jason Burdock: (lifting head from steering wheel) My spine!
Emily Burdock: I believe in you, Jason Burdock. Like I believe the sun or the moon in the sky. I believe.
Jason Burdock: As long as there is a sun and a moon I'll know that the Burdock will rise again like the eagle from the ashes.
Coach Kaiser "Bull" McCurry: Your team needs you. I need you, Jason. Now get up out of that iron lung and show those Russkies how we Americans can pass!
Jason Burdock: I'll pass like George Washington! Raaaaaaaarrrr, (tears out of his iron lung) I'm coming for you, Stalin!
Ivanov Giveupski: Ha. Ha. Ha. Did they use a can opener to get you onto the field?
Jason Burdock: No, but they're going to have to use a can opener to get you off of it! HUT, HUT, HIIIIIIKE!
Decento Halfbackerson: We did it! We won the game!
Goodfry Blackfriend: There's no "we" in Burdock, you dig?
Jason Burdock: No, but there is a certain lion and a certain tiger in me. (looks off into the setting sun) We did it, dad. (More)