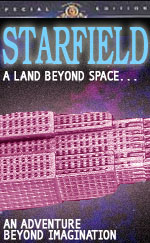 Genre: Sci-fi / Drama / Educational (more)
Tagline: A land beyond space& an adventure beyond imagination!
Plot Outline: Captain John Hague of the Starfreighter Pantheon is left unconscious by an oxygen shortage. When he wakes up, his entire crew is gone, and he must venture into the uncharted Starfield to ask them about& (more) (view trailer)

User Comments: Not as good as I remember. (more)

John Hague: And what's your name, hotshot?
Tarbor: I'm afraid it's quite unpronounceable in your language, human. You say your "r's" funny. (more)