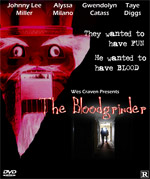 Genre: Horror / Suspense / Inaccurate History / Puppets (more)
Tagline: They wanted to have FUN. He wanted to have BLOOD. To GRIND. In his GRINDER.
Plot Outline: Six college students visiting Europe on spring break decide to spend the weekend in an abandoned World War II puppet factory, but all is not as it seems as the puppets begin to (more) (view trailer)
User Comments: A stain on the reputations of European puppeteers during World War II! As a puppeteer myself I find this movie dusgusting and full of libel and slander and (more)
User Rating: