To properly understand my demise, you must first become acquainted with the man who ended my fat, gay life: CrowfeatheR. 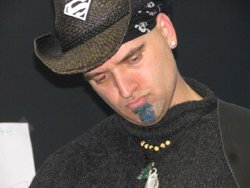 "It's blue because I was munching on a Smurf bitch's twat." *plays a rude ass guitar solo*CrowfeatheR (real name who the fuck knows, who the fuck cares; he probably insists people call him CrowfeatheR in real life; all telling them to over-enunciate the R and whatnot) is a 40 year old man from Vermont with a day-glo soul patch and a penchant for wearing those gay-ass rock star cowboy hats (you know you're at the height of rock fashion when you share your taste in hats with Bret Michaels from Poison). He is also quite possibly a pedophile as, word has it, he likes to chat up the underage ladies on Myspace.

Oh, I guess I should mention he also fancies himself a musician. Apparently, he was in a couple of "almost-was" grunge bands in the early 90's. Of course, the keyword there is "almost-was". Objectively speaking, no one has ever given two tugs of a dick about CrowfeatheR, possibly including his own parents. If there are two things Vermont is known for, it's being the setting of hit 80's sitcom Newhart and maple syrup. Note that neither of these two things are "a burgeoning grunge scene".

These days, CrowfeatheR spends his days getting banned for life from Vermont venues, hitting on underage girls on Myspace, writing literally the worst music EVER, lying about how (un)popular he is and, depending on which side of the water bed he gets up on, threatening to either sue people or beat them up.

Not that I don't blame him. I fancy myself a musician too, and lord knows I'd be chock full of impotent rage if I made shit that sounded like this:

this man is a pedophile
by occupyjapan

And in mp3 format: