I, myself, was blissfully unaware of CrowfeatheR's unfortunate existence until a dozen people submitted this video, one right after the other. Apparently, this is the video for his "hit single" Black Magic Dance featuring CrowfeatheR, CrowfeatheR's soul patch, an untalented rapper, a dancing meth addict and more terrible video effects than you can shake an Amiga Video Toaster at. 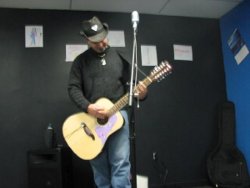 Because y'know, in this economy, Sony/BMI/Def Jam/whatever are all chomping at the bit to sign and invest a shit ton of money in a fat, 40 year old dude who makes unmarketable songs, has an ego roughly the size of North Dakota, makes awful, low budget green screen videos, hits on/possibly has sex with underage girls and threatens physical violence upon teenagers who make fun of him.

Normally, I'd rip his video and put it on my channel to avoid giving a future sex offender any more exposure, but in this case I'll make an exception. Since CrowfeatheR seems to think that any publicity is good publicity, feel free to give him all the publicity you want! I'm sure it'll definitely help him in his quest for a record deal when a big record company exec happens upon this video and sees page after page of people calling him a pedophile piece of shit faggot.

"We do too, sheÿ is a pro dance instructor in VT at a prestigious dance school and was a real treat to work with."

"Hey it's CrowfeatheR and I've gotten some emails form female fans stating they think they can booty dance sexier than the pro dancer in the Video. I admit we had to keep it some what conservative so it can go on Fuse and MTV without censor issues. WE couldn't do bare-ass, oiled up, booty crunk, but you can. I encourage some response videos, as nasty, dirty, sexy as you want to make them because there is no risk to you like there was for us. Show us what you got!"