I think I have made it abundantly clear that CrowfeatheR is an awful human being, whom the world would be better off without. 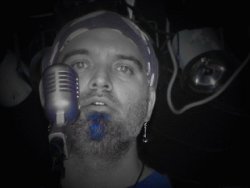 A cry for help?To summarize this total mess of a person, CrowfeatheR clearly wants to be a rock star really, REALLY badly and is willing to do whatever it takes, possibly because he knows that he's getting older and is already well past the marketable shelf life for a mainstream musician. The result is CrowfeatheR going in a million directions at once, in an ever more futile effort to latch onto something that will make him popular. He namedrops grunge bands, brags about his jazz roots, posts videos of himself playing wanky metal solos and writes songs that alternate between acoustic ballads and terrible metal/hip hop mash ups. He doesn't have a game plan beyond "get famous" and to achieve this rather lofty goal, his plan is simply to "do something that will make me famous".

At the heart of it, CrowfeatheR is clearly a pretty lonely, depressed guy. 10 times out of 10, the kind of bragadocious shit he constantly spews is a defense mechanism set up to prevent further bruising to CrowfeatheR's ego. His attitude towards women is clearly backwards, insulting and sexist, possibly either stemming from or contributing to his lack of successful, adult relationships. He is a decent guitarist, but only just.

In the end, CrowfeatheR is what he is: a case study in "almost making it" at a younger age which stopped his mental and emotional maturation dead in it's tracks and causes him to always try to recapture what he almost had.

Oh wait, I forgot: dude wants to have sex with underage girls. Fuck this fat, untalented faggot. Play yourself off, CrowfeatheR! I am dead.