For those of you who actually listen to good music, and thus might not be aware, 90's alt rock band The Smashing Pumpkins recently reunited and released a new album entitled "Zeitgeist". Reviews were mixed; some people loved it and felt it was a return to their earlier sound. Others. however, felt that singer Billy Corgan was past his prime and that the band, which at this point is Billy Corgan, drummer Jimmy Chamberlain and two people no one cares about, was a shell of it's former self.

Some, however, were driven to absolute rage. 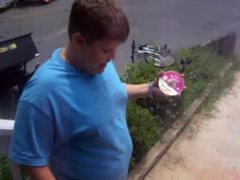 FUCK YOUR BALD *huff* HEADED *puff* SHEE-IT BILLY CORGAN!!Take for example Youtube user "1fatslug" who took some time out from having the most aptly named account in the history of the internet to give us his 2tonscents on the matter. Hailing from the deep south, where dieting hasn't been invented yet, 1fatslug is a morbidly obese child on a mission: to destroy capitalism and the music industry by destroying a CD-R, that he spent his own money on, containing an illegally downloaded copy of the new album. Oh, and he does it twice, hence the two videos.

"Fuck yer shee-it, Billeh Corrrgan, Fuck yooo-er bawld-headed shee-it!!!", he screams over and over while somehow managing to not break a 3mm thick piece of plastic no matter how hard he tries.

What could possibly drive one man to such acts of ineffectual rage? "Ah thowt it'd be anuther Sigh-meese Dream. FUCK YER SHEE-IT ZIGHT-GUST", 1fatslug explains. Meanwhile, his friend video tapes the entire mess while laughing mockingly, proving that 1fatslug apparently suffers from "Chris Farley Disorder", where you try to over-compensate for being fat by being a WACKY and ZANY guy. 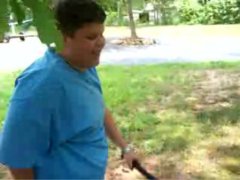 FUCK *inhales* YOUR *gasps for air* SHEE-IT!!
As I mentioned in a previous article, there are several sure fire ways to get a laugh, and one of them is "being fat". 1fatslug huffs and puffs his way through swinging a plastic wiffle ball bat, stabbing the cd with a knife, and lighting it on fire. He is literally so out of breath and exhausted by his 10 minutes of physical activity, that he nearly collapses at the end of the second video.

In the end, this video is just terrible. Someone should have Disarmed 1fatslug before he hurt himself. He must really feel like a real Zero after failing to break a CD, no matter how hard he Try Try Try-ed. Thankfully, Youtube is smart enough to realize these videos aren't Perfect and have given them terrible ratings. Today truly is the greatest day.

"Yeah, this dumb little fat shit doesn't know good music! I guess I'm a retard, butter ball, because I thought it was good and I'm a fan from way before you were even fucking born so don't talk to me like you have opinion on the matter!"
-JoshJen1023

"You're so hardxcore with your... butter knife?


Christ, you're an embarrassment to society. Get the fuck off of my internets. "
-justwonderfulx

"dude youre not cool just cause you smashed a cd that you hate. there are poor people, disadvantaged people in the world that would love to get that cd but cant afford to buy it (or even a cd player) snd you go and smash your copy of it. burn in hell shit face. "
-ZiGThEGoTH