What exactly happens in the mind of a morbidly obese child that makes them want to rage against everything they perceive as even mildly annoying? Previously on AwfulVision™, I reviewed a video that featured a real life Bobby Hill from King of the Hill angrily destroying a burnt copy of the new Smashing Pumpkins album. Not to be outdone, Youtuber and fellow fat kid sman92 took up the torch of "being fat and raging against really lame things" to bring you this video. If you thought it was possible to see a more pathetic video than Bobby Hill huffing and puffing while trying to light a CDR on fire, well... just watch. 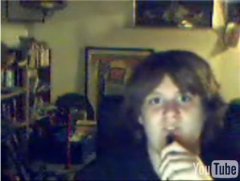 All I'm saiyan is that a little exercise wouldn't hurt, Goku.I'll admit something right off: I don't really have strong feelings about anime as a thing in and of its self. I've never cared to watch it, and think it's maybe a wee bit silly but it's not like the essence of anime is retarded and disgusting to the core like being a Juggalo or a furry is. It's just not my thing. I'm not at all annoyed by weirdly drawn cartoon featuring ninjas and saiyans or whatever the fuck; it's the fucking fans I hate.

An interesting thing to ponder is how you'd describe something to someone who's never heard of it and had no knowledge of it? I mean, how would you describe the color red to a blind man? You could tell him about things that were red, but guess what? He hasn't seen those. You could tell him that red is a warm color, often used to depict things that are hot, but... well, you know. Blind.

When sitting down to write this particular review, I decided to try just that. I wouldn't be describing the color red to a blind man. In fact, I'd be doing something far harder: I'd be describing anime to my 53 year old father over the phone. Could I get him to understand the subtleties of Naruto? The raw emotional power of Dragon Ball Z? Read on.

Me: "Hey Dad, I have a question."
Dad: "Shoot."
Me: "What is the dumbest thing you can think of?"
Dad: "Well, uh... what do you mean? Like the dumbest idea? Or the dumbest thing someone's done, or..."
Me: "Just the absolute dumbest thing ever."
Dad: "Wow... uh, I don't really know, I guess."
Me: "Would you like to know what the dumbest thing is?"
Dad: "Sure. What is it?"
Me: "Anime fans."
Dad: "Anime fans? You mean like a fan to cool something off?"
Me: "No no. A fan, like a sports fan. Only not sports. Anime."
Dad: "What's an anime?"
Me: "Anime is like a cartoon, kinda."
Dad: "Well, some cartoons are funny."
Me: "No. These aren't funny cartoons. Think of them as like... soap operas or something. Or like, well, like think of Star Wars or movies like that. You know, like Science Fiction-kinda cartoons. Not funny. More like action-oriented. And a lot of them have ninjas and stuff like that. And magic. And they're cartoons."
Dad: "Well, you like science fiction. What's wrong with them?"
Me: "No, no. It's the FANS of anime I'm talking about."
Dad: "Well, what's so bad about them? Are they like Trekkies or something?"
Me: "Kinda. Only worse. Like, some anime fans name their kids after their favorite anime characters. And they have conventions all the time where they dress up as their favorite characters from different animes. A lot of them like to write things called "fan fiction" where it's like they take the characters from their favorite anime and make up new stories for them. A lot of them even write EROTIC fan fiction, which I can guess you know what that means."
Dad: "Uh.... wow."
Me: "They also think Japan is some kind of magical Garden of Eden-like place apparently. Anime is made in Japan, and some people are so obsessed with it that they practically worship the Japanese people as a whole. A lot of them actually devote their lives to collecting katanas and learning to speak Japanese and stuff because they apparently think they ARE characters from anime."
Dad: "How old are they?"
Me: "I've seen pictures 40 and 50 year olds at the conventions I mentioned. Dressed up in costume of course."
Dad: "So they play dress up and think they're really the people in the cartoons?"
Me: "Yes."
Dad: "That is the dumbest thing."

Actually, come to think of it, explaining how retarded anime fans are isn't really that hard at all.

"Especially if it's Bleach or Naruto, where there's generally over 100,000 peers the day they hit the web. Why watch shitty youtube quality video? IS THE NEW GENERATION THAT FUCKING IMPATIENT?
...Oh yeah, I went there. With the caps lock."
-Garylisk