Videos Abe Sent Me™: Some ugly grandma jacks off a spoon

Sometimes I notice trends in things. For example, Something Awful forum user "Abraham" always sends me the best videos, I like saving the best videos for last, and Abe's videos are always last. Therefor, I'm going to kick off a new Web 3.9™ feature called "Videos Abe Sent Me™" which showcases Videos Abe sent me. This is one such video. 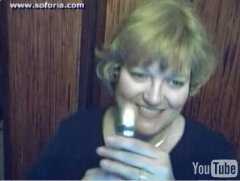 YEAH BABY WORK THAT SPOON YOU FUCKING SLUTThere's not really a lot I can say about the video. Some 50 year old broad jerks off a spoon as part of her mid-life crisis. Actually, I just assume that's what happens because that's what people who have actually managed to sit through this video tell me. As you may guess, I am not one of those people. I get about 10 seconds in and I.... just can't fucking do it. It's too awkward. Too uncomfortable. I mean, seriously, what kind of thimble does this lady use to carry around her self-awareness and shame?

A gold-plated, diamond-encrusted one, apparently.

That's because, while I can't fucking stomach this video long enough to sit through it, I can manage to choke down my vomit long enough to look at her website, www.soforia.com and apparently this crazy lady sells "hypnotism CDs" for 40 bucks a pop. So, in lieu of a proper video review, I'm going to instead take a look at her website. I realize not being able to watch this video makes me akin to a fireman who is terrified of fires, and I am just as ashamed of myself as you are.

Okay, so apparently it has a members section but doesn't offer any nude pictures. This is both a blessing and a curse. Honestly, I don't want to see "Mistress Sofaria" nude at all, but if I'm paying 25 bucks a month for something, I want to see it naked. I don't care what it is; once you hit the 25 dollar mark, I want to see some skin.

OH WOW, no wonder they charge such a premium! I mean, look at the quality of this shit here. Wowie! Zounds! Gadzooks! A 22 minute flash cartoon with a bunch of random words flying over a big pair of lips! And what's this? Apparently in the members section there is MUSIC AND SHIT playing too! Holy mother of shit.

Sadly, it appears that Lady Sofaria has succumbed to cancer. So, of course that means you can donate money in 25 dollar increments. But don't cry, gentle friends. I'm sure Lady Sofaria is talking in a husky voice and jerking off spoons in Heaven, or Valhalla, or where ever retarded internet witches go.

Thanks for tuning in to yet another action-packed edition of AwfulVision™! I'd like to thank Seth (not me), Paul, Bryan, Boone, William and from the SA Forums Abraham, Lowtax, and the rest of my pals that help me find these videos each week. I couldn't do it without you guys, but I'd probably be a happier, more well-adjusted man if I did.

To the countless millions of you who have tried submitting videos in the past, but found my email address didn't work, we have the issue resolved at long last. So be sure to send your submissions here. Really. It works this time, I promise. In fact, most of the videos this week were from readers just like you!

Also, check out our OFFICIAL YOUTUBE CHANNEL. Slowly but surely we are getting all the videos uploaded and reuploaded (as the idiots in the videos file complaints about it) so feel free to stop by, subscribe and shoot us a message!