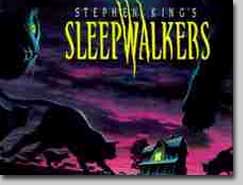 Overview: Stephen King crashes and burns, engulfed a flaming kiddie pool of leftover Cold War jet fuel, in this horror thriller starring evil mutant cat-people and some others who may or may not be evil mutant cat-people. Zany, vomit-inducing antics ensue, including a lot of dumb rednecks getting killed and a lot of dumb redneck cars getting blown up after being shot with a single bullet. A single cat-person bullet. Of evil.

The Case For: I can't think of a single reason to watch this movie. I would rather have spent my hour and a half being anally prodded by geriatrics in the back hallway of the local Denny's. In fact, I would rather have done the prodding myself. With a rusty screwdriver. I suppose that if you are an incest fan or enjoy watching police cars burst into flames with one bullet, this is the movie for you. I personally want that time from my life back, hopefully so I can spend it planning the many ways I can cause life-threatening injuries to Stephen King for intentionally producing such crap.

The Case Against: The Internet does not have the storage capacity to contain all the reasons against adamantly avoiding this film. 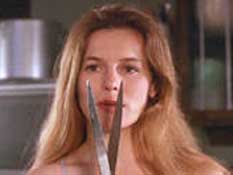 This movie had more placid cutting off of faces with enormous scissors than any I've seen to date. And I've seen plenty of face-cutting, my friends.

I don't know how many nights I've lain in bed, unable to sleep, wishing that somewhere out there was an incestuous mother and son evil superhero team of mutant cat-people who needed virgin blood to live and had the ability to turn themselves and their clothing invisible. Oh yeah, and they can also change from human to evil mutant cat-person form at will. And they are really strong. Oooh, but they are afraid of real cats even though they are part cat and stray cats gather by the hundreds in their yard for no explicable reason! Oh, and they can change their cars into other, occasionally invisible, brand new cars! Yeah, that's it! So imagine my wonder and delight when I realized that I am not alone in my desire for this idyllic Utopia of incest and humanoid dancing evil cat people. Popular horror author Stephen King shares my dream and he chose to immortalize this vision of a perfect world in a brilliant film masterpiece entitled "Stephen King's Sleepwalkers," one of the more shining cinematic gems released in 1992. In making this movie, King once again proves that he should be locked in a very small closet and that closet should be set on fire, extinguished, and set on fire a second time in order to keep him from ever coming near a writing implement ever again. Despite the fact that this movie should be considered an international war crime, "Sleepwalkers" grossed over 28 million dollars at the box office, proving that if a mentally impaired homeless man were to accidentally wander into a booth full of film equipment and record himself doing Bea Arthur impersonations while farting, the American public would probably pay top dollar to see it. If you don't think this is true, attempt to explain the success behind "Scary Movie 2." I dare you.

"Sleepwalkers" takes place in a sleepy Indiana town in which the aforementioned incestuous mother and son team of evil mutant cat-people comes to set up camp and live. They have led nomadic lives throughout history, constantly moving from place to place, setting up steel-jaw traps for stray cats in their yard, feeding on the blood of virgins, and having beautiful mother-son incest sex to "Popular Instrumental Hits of the 60's." They are probably the last of their poorly-made-rubber-costumed kind, and together they hide out in their lovely Arts and Crafts-style home and plot their next kill while simultaneously lamenting the fact that they are an incestuous mother and son team of evil mutant cat-people with invisible cars.

The plot thickens when the son (Brian Krause) falls in love with a lovely local virgin girl (Madchen Amick) much to the despair of his mother (Alice Krige). The mother urges her son to kill the girl, threatening that she will smack him silly and withhold sex for a week if he does not bring the girl back so they may feed. The boy reluctantly agrees, and later that day during a routine picnic date at the cemetery, the mutant cat-boy tries to kill his girlfriend by sucking a glowing purple space laser out of her mouth. She responds by stabbing the mutant cat-boy with a corkscrew, bashing him in the head with a camera, and running away while he makes stupid wisecracking remarks. Meanwhile, a stereotypically dumb black police officer is toolin' on down the road singing rollickin' songs about drinking malt liquor and smoking 2-dollar crack with his cat, Clovis, at his side. Yes, that is correct, he always takes his cat with him on duty. I'm assuming they're running short of human police officers in Indiana. He pulls into the cemetery just in time to see the girl rushing out and screaming, upon which a dialogue similar to this takes place: 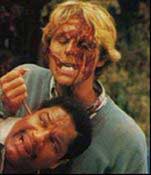 The police officer and mutant cat-boy sing old folk songs in one of the movie's more questionable scenes.

At this point the evil mutant cat-boy runs out of the cemetery and stabs the police officer in the ear with a pencil, thus ending his short career as a really dumb incompetent police officer who tries to fight crime with his pet cat.

After 10 minutes the girl finally figures out which of two buttons to push on the police radio in order to call for help, and the police show up to ask her questions and take pictures of the surrounding dirt and police car seats. She tells them that she was attacked by an evil mutant cat-boy and gives them his address, at which point they send 40 or so incompetent braindead officers to the house of the incestuous mother and son team of evil mutant cat-people. The mother learns about this dastardly plot and becomes very upset about the maiming of her evil mutant cat-boy sex slave son, so she turns both them and their car invisible to hide until the police have left. The cops, of course, find nothing at the house but invisible evil mutant cat people, so they leave behind a car of two officers whose job is to make sure that the boy (or any other illegal evil mutant cat people) doesn't show up. The evil mutant cat-mother becomes visible once again and decides to wreak vengeance upon the girl who has injured her son by refusing to become dead. She heads out of the house and grabs the two officers by the heads, one in each hand. The screenplay that King wrote must have looked something like this:

Keep in mind that Clive Barker also had a part in this film as well, so there's plenty of blame to be passed around. The evil mutant cat-mother then proceeds to drive the police car to the house of the girl. I'm not sure why she chose to drive a police car instead of a shapeshifting invisible turbo jet magic car, but hey, who can truly understand the ways of the evil mutant cat-people? After arriving, she introduces herself by smashing the father in the face with a flower vase, throwing the mother out of the window, and then going after the oafish police officer who is inexplicably still eating dinner at the girl's house. The officer is just able to get a backup call in to the police headquarters before he is STABBED FATALLY IN THE BACK WITH AN EAR OF CORN. Yes, that is correct, he is murdered by corn. I can't even begin to imagine what police code that would be violating.

The mutant cat-mother is now even more upset than before, so she smacks the virgin girl around a bit, takes the police man's gun, and storms out of the house. Police cars pull up and officers prepare to greet the evil mutant cat-woman with handgun fire, when suddenly the mutant cat-mother is inexplicably armed with a super-mega-omni-ultra-Martian-gun which is capable of making cars explode with a single shot. She blows up two police cars with two bullets, causing a fiery inferno of destruction and probably lowering the surrounding property value. Oh yeah, and some rubber dummies fall out of the police cars and catch fire.

Evil mutant cat-mother then decides to drag the girl back to her lovely Arts and Crafts home, reanimate the dead corpse of her mutant cat-son, and force the girl to dance with it to the evil mutant cat-person CD "Instrumental Hits of the 60's." Note that things are beginning to come full-circle; it's the remarkable artistry of Stephen King at its finest! The mutant cat-boy is suddenly rejuvenated by the dance, and he once again begins his noble attempt to kill the girl by sucking glowing purple laser beams from her mouth. The girl inserts her fingers into the mutant cat-boy's eyes, causing them to liquefy and run down his face. She does this approximately five hundred times before being chased out of the house by the mother, who apparently has a "no exploding eyeballs inside the house" rule.