Christopher Guest (Waiting for Guffman, Best In Show, Spinal Tap etc) guest taught my documentary film class for a week. He was incredibly chill and personable, although he has a very wry and dry wit in real life just as much as in his films. God have mercy on you if you ask him a dumb question.

One girl asked (jokingly I hope) if he was going to make his next film on our campus and he just shot her the most chilling look and asked her why she thought he would even be slightly interested in doing that. Another guy him, "What he thought about film school since he went to NYU", to which Guest replied, "Well I didn't go to film school, so apparently not much".

Mostly though he just talked about his work. He creates very detailed back stories for all of his characters as he writes with Eugene Levy, and all of the on camera work is improvised, following a basic plot outline. He's a very hands on director, even when he's in scenes he'll tap the cameraman with his foot to tell him to zoom in. Editing is a crazy yearlong process where he sits with the editor and goes through hours and hours of footage. He's there for every decision.

The best part was the end of the week though, when a few of us took him out to lunch. There he talked about the Broadway adaptation he's working on of Guffman called "Red White and Blaine", since this was during the writer's strike he couldn't really do much else. He also is a huge collector of guitars and mandolins, and was working on releasing some crazy mandolin jazz album. Really interesting guy.

Smoked reefer with Sarah Silverman and Doug Benson. Sarah is an incredibly nice lady and has a real relaxing presence to her. Doug's a great dude too. There was a little kid hanging out backstage so Sarah kept making mouth farts to entertain her, it was adorable.

I'm a fairly awkward dude, so when we were going to take a picture I just stood next to her. She threw her arm around me, so I reciprocated. It was pretty rad. Thus, the jackass grin on my face. 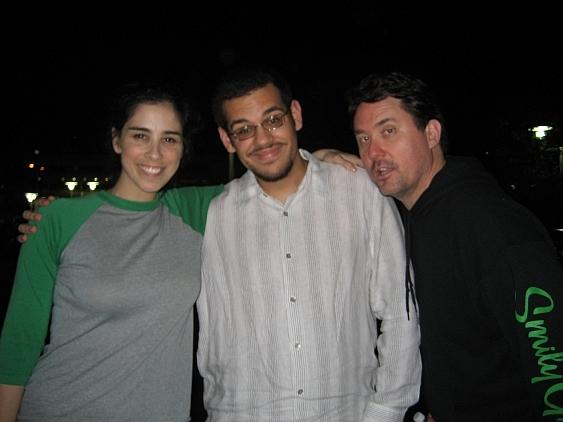 I met Ben Roethlisberger at a restaurant in Pittsburgh after they won the superbowl. A few friends and I saw him hanging out with some buddies so the girl who I was with told the waitress to put his dessert on our tab for winning the superbowl.

He came over and was like "thanks for the offer, but I can't eat sweets cause of my training. I'm buying your dinners for you though, thanks for the support"

I talked to David Sedaris for a while after he did a book reading, and he was really nice and, unsurprisingly, very funny. I asked him to sign my copy of "Naked" as if we were old friends who'd had a falling out, and he signed it "Dave-- Can we at least try to bury the hatchet? I really miss hanging out with you and your negro friends."

I met Michael Moore under similar circumstances and it's pretty hard to believe how sweet he is to people who come to see him speak. He stuck around for hours and hours after his event to make sure everyone got to talk to him for a decent amount of time-- he even put on a whole extra show because the first one sold out and not everyone got to see it.

Anderson Cooper: I had to mic him for a talk he was giving, and there were some delays so I sat with him and shot the shit for 15 minutes. He's a million times cooler in person than on TV, and he's fucking cool on TV.

He really is that nice, if not nicer in real life.

That man truly was a legend.

I'm a camera man for a local hip hop show in Texas.

Method Man - We were supposed to shoot an interview with him at a meet and greet. We got there, then he showed up, sat at the table and started signing autographs for the long line of fans. The host of our show saw the line, so he tried to tell one of his posse that we were going to go next door to get lunch and we'd be back in a few minutes when the line had died down and Method had time to do the interview.

The posse guy reacted strongly, saying stuff like "hey, back off, not right now." The host tried again to explain we were going next door until Method was ready, but the flunkie kept telling him to back off. Remember, this was a scheduled interview.

I hoisted up my camera and we headed out the door. Method must have heard what was going on because he came out the door behind us, talked to the host for a minute, then did the interview right then and there on the sidewalk.

I wouldn't expect him to take a half an hour to do the interview while all the fans waited, and it was cool that he saw one of his posse was being an ass and rectified it. We're just a local show after all, so that was really cool of him.

We shot an interview with her just after her first album was released and her first single was going crazy. It was scheduled to take place in the hotel she was staying at. Usually in these cases we'd meet a lacky in the lobby and wait for the star to come down to a conference room or something.

Instead we went right up to her room, she let us in and we waited a bit while she put on some makeup, then we shot the interview on the couch in the room, no one but me, the host, and her in the room. This was really bizarre, to this day I don't know if she was being a normal person or if it was some fluke of circumstance.

Benzino - I'd be surprised if many folks here know who he is, but he's the (current? former?) co-owner of The Source magazine and also a rapper.

He invited us into his tour bus, and chatted with the host of the show for a while and showed us his latest video, which wasn't out yet. That was cool, usually we wait outside, hop in when they're ready, do the interview, then leave.

He smoked some weed and ranted about Eminem mostly. Apparently he had some big fued with him. Our host was gracious enough not to ask him about any of that during the interview. Maybe Benzino just wanted to rant about Eminem to somebody, but chatting off-camera like that was cool.

Lil Flip - He let us hang out at his rented beach house during Kappa weekend, which is a big hip hop gathering in Corpus Christi each year. This was when his first hit "This Is The Way We Ball" was going strong here in Texas. We rode in his convoy when he went to his performance. For some reason we went there and back at top speed with a police escort.

We didn't get the interview till late that night, but we got to hang out and eat and drink whatever was around.

Lil Jon once grabbed my camera and shook it during an interview while yelling. That wasn't cool.