Once when perusing clocks, me and my girlfriend heard a mother screaming at her child from the next aisle: "I'm gonna tell you one more time, and then I'm gonna kick you in the head. Now put it down!" 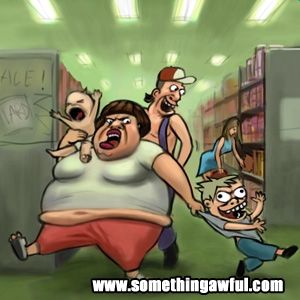 I've only been to Walmart a couple of times but both were memorable and horrifying.

My first visit to Walmart was with some friends in preparation for a hiking trip. We were wandering around the sporting goods section looking for random supplies and as we turned a corner into an aisle we found a little boy, maybe 5 years old, standing with his pants around his ankles but his underwear still pulled up, with diarrhoea all over his legs and a pool of it on the floor. He just stood there and stared at us like it was the most normal thing in the world. The smell was horrendous and there were no adults in sight. We left and went to Target instead.

The second time I was visiting a friend at her farmhouse in rural Oklahoma and needed to grab a toothbrush and some toothpaste, as I'd forgotten mine. I rolled up to a 24-hour Walmart at about midnight and it was like stepping into the movie Jacob's Ladder. As I walked through the doors some drunk guy stumbled into me and vomited all over the place, narrowly missing my shoes. Then I saw a woman asleep on the floor, in the middle of the cosmetics section, snoring loudly and wrapped up in a blanket like she was at home in bed. Finally as I was cashing out I realized that the female, middle-aged, and otherwise normal looking cashier had a glass eye which was also weeping some kind of white, milky fluid out of the outer corner. I left in a hurry and haven't set foot in a Walmart since.

I was in a Wal-Mart once when I saw an obscenely fat, dirty man in a filthy tank-top that had once been white but was now a dingy grey. His face looked piggish and sunk in, and he wore a camouflaged baseball cap with a Confederate flag on the front. Truthfully, I'm poor at eyeballing weight, but I would guess he was at least 350-400 pounds.

His breasts, like Bob's from Fight Club, hung enormous. Unlike Bob's though, these were more streamlined and upswept, like the prow of an icebreaker. The most horrifying part was the aureoles. The positioning of the shirt on these hideous man-breasts was such that each arm strap neatly bisected and covered the center of his nipple but had no hope of hiding the aureole. The ring of flesh, the dark pink color of an abscess, must have been six inches in diameter, with about three on each side of the cotton strip. His nipples, the size of the first knuckle on my thumb, pressed visibly against the material, obviously semi-erect. He made a grunting noise as he walked.

My friend is the manager at a chain grocery store much like Sav-A-Lot or Price Chopper, pretty low end, full of poor customers, and located in a bad part of town. One night they actually found a customer flopping around on the floor of the employee bathroom smoking crack with a crack pipe made of shit he had stolen and scavenged from within the store - a brass spray nozzle, a piece of plumbing tubing, etc.

Try as I might, I'll never forget the day I saw a person without any legs crawl across the aisle right in front of me. Swear to god. I was more stunned than anything.

I was at WalMart and there was a woman walking across the parking lot. Her stomach was moving kind of weird, and I was staring at her trying to figure out what was going on.

Only to realize...hey! That's not her stomach! Yeah, her tits were so saggy that she looked completely flat chested, but really her (rather large) boobs were hanging by her stomach. And she wasn't wearing a bra so they were swaying with every step she took.

I have no idea how breasts can even get to the point where they'd sag quite that low.