When I was 18, I decided (about 20 minutes before work) that I was really fat. I felt an urgent need to put this to right with savage correction, so I found my mom's Double Ab Wheel and gave it a roll. But whichever way I pushed it, I fell flat onto my face while breaking my glasses. Feeling very dazed, I wandered to the bathroom to find that I had somehow torn off half my eyebrow. I put a bandage on it and trotted off to work. After a customer pointed out that my bandage was bleeding, I was taken to the doctor, who gave me 8 stitches. God damn those stitches and god damn that infernal device! Anyway, this week, the SA Forum Goons share their own cringeworthy moments!

Gils
"Broke my left arm by banging it on a dresser while sleepwalking. I was killing imaginary mosquitoes."

mastapasta
"Didn't look both ways, got hit by a car. When I tell people I was hit by a car, they ALWAYS ask if I looked both ways. Oh, the shame."

Creature
"Fell over the bed and cut my knee open while trying to remove my pants.

Tony Danza Claus
"I injured my knee by driving my old truck with my leg resting against the door handle (leg at a 90 degree angle). This pushed the kneecap to the side ever so slightly, which somehow led to inflammation and swelling.

I was in a leg cast because I rested my knee against something. How lame is that?"

Terminally Ill
"A couple years ago, we were all hiking around, exploring an old Civil War-era cemetery we'd found. On our way back to the car, we passed by a kind of swampy area, and the ground under my friend's feet caved in a little. She fell and grabbed the closest thing for support, which unfortunately happened to be this plant: 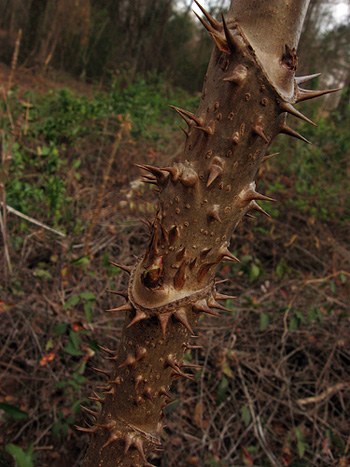 We spent hours afterward pulling huge thorns out of the palms of her hands.

Chris!
"When I was a kid, I belonged to something called "Beavers," which is like scouts for people too young for scouts (so I would have been between 6 and 8 years old).

We were on a trip away to some other part of England, which (if memory serves) was the only place to have a particular type of soldier-ant, much bigger than regular ants, half black and half red.

We were walking through the woods when I needed to pee. I walked into the bushes and was doing my thing, when one of the giant ants somehow crawled from a leaf onto my hand onto my penis. I don't know why, but I just watched it with detached interest, until it bit my little baby cock. I stood there screaming my lungs out, until one of the teenage girls who were supervising us ran over to find me clutching my dick, with the ant still on it. She had to slap my dick until the ant fell off, then walk me (still with my red, bitten penis out) to one of the adults to rub some ointment on.

The whole incident was traumatising, probably for the young girl as much as me. I sometimes wonder if that is the cause of my strange ants-on-dick fetish."

Daeren
"I worked at a Panera one summer. I manned the registers, refilled coffee, got people bagels, made smoothies, etc. I was behind the counter where you make smoothies (I swear to God I will probably be able to make that strawberry smoothie in my sleep until the day I die) and I got some of the smoothie mix stuff on my hands as I was mixing one. "Damn, guess I need to wash my hands," I thought. "I suppose that little thin faucet thing with the lever on the side of the sink is the soap dispenser."

It wasn't. It was the superheated water dispenser for when you want to make tea really, really quickly.

I proceeded to discover this by scalding the shit out of my hand and having to choke back a scream of agony and profanities while a woman waited for her smoothie. No permanent marks, I didn't have the water on for very long, but the agony (and people making fun of me until the summer was out) was eternal."