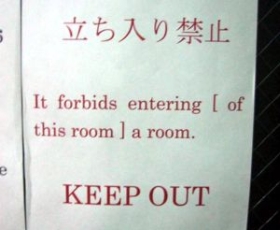 While my Italian friend was in America, he decided to make dinner for his host family. He made a list of everything he would need so his host mother could pick it up when she went to the grocery store. He wanted a cheese that could be grated, but he didn't know the word "to grate" and, knowing that we use a lot of French words for culinary terms, went with the word rapé. His host mother came back from the grocery store and told him she found everything but one item on the list...a cheese that could be raped.

Thankfully, I've only made one really embarrassing mistake now that I'm living in Italy. At school we were reading a book that had some phrase like "let yourself be carried away by the current" or something like that. We were having problems understanding exactly what was being said, so our teacher told us to write five sentences like that for our homework. I still didn't really understand the sentence structure, so I just started making up normal sentences and converting them. One such sentence was "Lui fa tutto" (He does everything), converted to "Mi lascio fare tutto da lui", as per the example. When I read it out loud to the class the next day, my teacher started laughing and told me the grammar was correct, but to never, ever say that again. Turns out I'd said "I let him do everything to me."

A friend of mine is taking Japanese at uni. Once he met a Japanese girl and was trying to talk to her about kendama, a traditional Japanese toy.

He ended up saying "kintama" which was a Japanese slang for testicles. To make it worse he described it as "the thing with the stick" to the confused girl.

I don't know how they deal with it in other countries but IKEA has a shelf called "Jerker", in Sweden it's a rare boys name but I can imagine most English speakers don't know that.

I've had a couple of these since I started my study abroad in Tokyo. A bit off but one of the Japanese students on my floor in the dorm on a flyer advertising a little cooking get together we had a few months back had a line written "cooking each other" instead of "cooking for each other".