HELLO!!! It is your father and I want you to know that i have quit my job as a party planner. I am not good at it and it was very bad for me. Yes we had 2 good parties before the bad one. I brought the mayor's prized pigs to a birthday party and a baby shower and both times everything was very good. 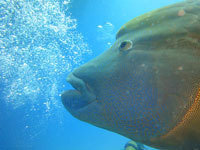 On the third one it was a young man's birthday. It was the birthday of Mr. Dorty's son. Mr. Dorty had become famous in town for his world renowned fish and especially his biggest fish of all, Edna, who was the only kind of some special fish in captivity. she was a beauty. 40 inches long and a big temper. if you made eye contact with her in the tank she would growl. Mr. Dorty said it was because either she was mad, or because she wanted to mate so bad, or mad Because of that. That's too much business for me, though. Anyway my business was not the fish but that his son, Idiot Brian (my name for him i don't know his real name) got a good time. I did not have any good birthday invites about fish so i sent all the kids ones with frogs that said HOPPY BIRTHDAY thinking that kids love to hop and frogs love water and to hop also.

For about 2 days before the party I was very sick. I kept sneezing a lot and i had very bad congestion up in my nose. I thought I was going to have to quit the party but it was too close to party time so i could not quit. I took a bunch of medicine and went to the party anyway

I showed up and almost everything was ok. The Pet Lord pets were all out in their pens thanks to High School Man (kid from school that i hired who doesn't talk to me so i call him High School Man). And the kids were getting to business with the fun party. Then some guy showed up.

I had hired a man from online (Mitch The Piggyback Man) who was going to give piggyback rides to whoever wanted them, but i guess i mixed up the billing and customer parts on the order form because when he showed up at the party he kept shouting my name a lot until i came up to him and then he said "There's My Birthday Man" even though i was only the billing man and NOT the birthday man and he hoisted me up onto his shoulders. he was very tall and very muscular and wearing a beret and harness and tiny whip and leather underwear. and he strapped my legs into some straps he had around his chest and i was pretty much stuck as he went marching around the back yard blowing into his train whistle and saying "Birthday Man Coming Through" even though it wasn't even close to my birthday and i kept telling that to the kids below.

This made the dogs bark a lot. 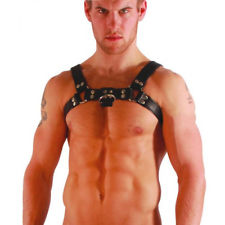 This is a lot like what Piggyback Man Mitch was wearing but he was a lot less angry than this guyMitch would not stop marching around the backyard whipping things with his smaller than normal leather whip. It was making a big ruckus for the dogs but i guess Mitch thought that's what i wanted because he laughed at the whole thing and I was too sick to figure out how to tell him to stop.

Probably the big part that I remember is that i got into a Sneezing Ruckus where i sneezed about 8 to 12 times in a row and on the last one I finally sneezed out a corn niblet from my sinus cavity. instantly i felt my congestion going away and it must have been from when i "Drank" a can of corn niblets like it was a drink when I could not find any forks or spoons about a week before that.

Anyhow the niblet flew through the open sliding door into the house and near the big fish tank and i thought it was going to go inside of it, but one of Mr. Dorty's big dogs jumped up to try and catch it. It was really a really good try but the kernel landed directly on Idiot Brian's shirt and also the big fish started trying to jump out of the tank. Either it wanted to catch the corn or it was getting all mad from the dog commotion. Either way, before very long it was halfway leaning over the edge of the fishtank with its head out in the air and sounding like a human saying "Hip. Hip. Hip" but it was just the fish breathing or mouth movements that sounded human to us. The great fish soon got tired and the "hip" sound became "hop" and some of the dumber kids thought the Hoppy Birthday was starting and started hopping. And Mr. Dorty was nowhere to be seen and I definitely didnt want to shove the fish back in the thing with my hands.

The fish being partway out of the tank set off a silent alarm of some kind to protect the expensive fish and the police showed up and wrapped me and Mitch up in a blanket and we took off. High School Man got the animals back and none of us got in trouble except maybe for Mr. Dorty who won't pay me or talk to me even if i call him from my neighbor's phone. the end. the fish stayed alive it was ok. GOOD BY!!!!!!!!!