Monday, Feb 03, 2003 by Rich "Lowtax" Kyanka (@TwitterHasBannedAllMyAccountsEver)
Do you smell that mysterious fragrance in the air? Well if you're a Linux user and haven't changed your shirt in the past six months, probably not, but the rest of us can undoubtedly sense a lingering presence around us. War is in the air, and soon we will be entering an exciting, action-packed battle in Iraq featuring many blurry photographs, some of them featuring neon green lights. To celebrate this upcoming festival of mass casualties and war crimes, the folks on the Something Awful Forums decided to combine their knowledge of major battles with their inherent nerd-knowledge of the popular card game for recluses, "Magic: The Gathering." The result? A Something Awful Goon collection of Wizards of the Coast "Gulf War 2: The Reckoning" cards! Since I know absolutely jack shit about this game or the rules behind it, I'm not even going to bother captioning these images, as they speak for themselves. Buy the complete set and get a 40% discount off your next SA Forums account! 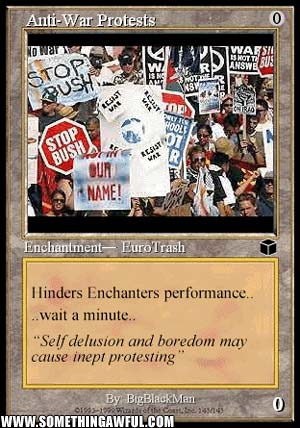 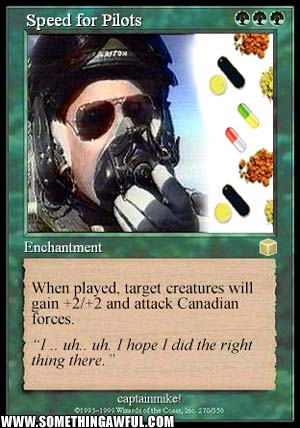 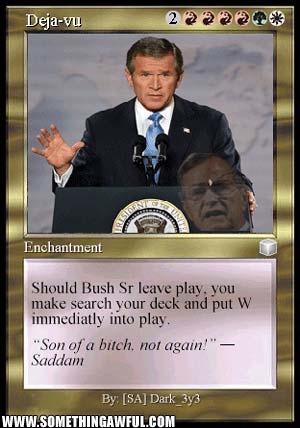 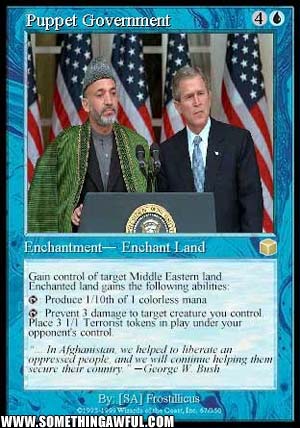