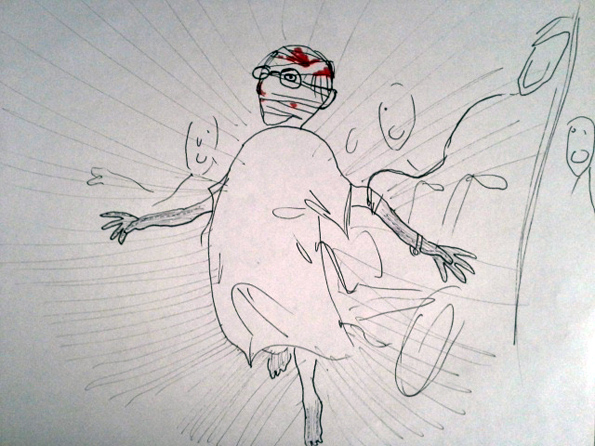 I knew then what it was felt like to be one of the ghosts in Mrs. Pac-Man after she eats a power pellet and the ghosts start flashing and Mrs. Pac-Man chases them all throughout the maze. Except instead of there being several ghosts and only one Mrs. Pac-man, it was as if there were hundreds of Mrs. Pac-Men and only one ghost, myself.

I'm trying to say that the doctors and nurses were chasing me.

"After him!" Shouted a voice that sounded a lot like my father.

While I was running down the hall at 9/10ths of my top speed, I realized I would need to push on to my full speed to keep ahead of them, and so I did, much in the same way that a race car driver might push down even harder with his foot on the large button that makes the car go even faster. Only I had no car or gas button, I merely had my wits and a vast reservoir of inner strength.

My memories flashed back to the moment in my childhood when I turned twelve years old and my parents took me to Discovery Zone. I invited my friend but he didn't come. In many ways, my day there was exactly like my day today had been so far: Frightening and disappointing.

In the cartoons they show on Cartoon Network's Boomerang channel, the characters will be walking and the background keeps scrolling past and repeating itself and that is how I felt at the time, I felt like the background behind me was endlessly repeating and then I realized it actually was because I was just running in a big circle through the hospital.

There was only one escape.