Earlier this summer, SA writer Zack Parsons pleaded with the public: "Do Not Kill Anybody Because of Slenderman." Stabby teens seem to be honoring his request, so the Forum Goons figured it was probably safe to brainstorm a new boogeyman. Obviously they needed to be more responsible this time, so they came up with a new meme that almost certainly won't inspire any attempted murders! His name is Bendyman, and his catchphrase is "Murder You're Famil," which just looks like random letters to me but maybe it's some sort of Cthulhu language that's scary on the Internet or whatever.

what if there's a guy who lives in the sewers and he bends himself into different shapes to fit up the pipes to the toilet or shower also hes pretty stretchy and skinny, maybe he could be called bending man or something?

bendy man, i am so creeped out right now, what if it was real?

whoops got cut off a bit there. by law of meme evolution its now "Murder You're Famil." adjust your memes accordingly. 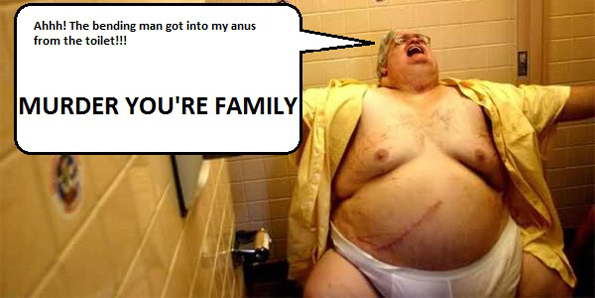 Here I am, sitting on the toilet, after a long day at work, and thinking to myself in coherent sentences. I am in the process of doing a poo into the toilet and it's pretty relaxing because nothing bad can happen to me, here, on this toilet.

That's strange, there are some sounds coming from the plumbing that lead from the sewer system to this toilet, upon which I am sitting. I suppose it is normal, but it does remind me of the things that I overheard some of the other guys at work talking about. A man who can bend, a bending man, that lives in the sewers and preys on innocent toilet and shower users, like myself. Ha! What nonsense, I certainly don't put any stock in such tales.

But... what are these continuing sounds? It almost sounds like a voice, rising from the deep! I think I can almost make it out, while I am sitting here, on this toilet. It sounds like... "merger"? I must be imagining things! Well, back to concentrating on pooing.

No, no! There are bubbles rising from the toilet bowl! I cannot get up because I am in the middle of doing a poo and that is not something I want to clean up. There's a long finger poking up between my legs, and the voice is more distinct! It wasn't "merger", it was never "merger"! It was MURDER! And something else... you are family? Murder you are family? If only I believed the tales and reacted more swiftly, perhaps I wouldn't be in the position that I am in, now, which is "about to be murdered in an indistinct yet surely horrific manner". But before I die, the last thing I hear is.... MURDER YOU'RE FAMILY

I heard that if you are sitting on a toilet and you still have a family, the bending man will sneak up and stick his long finger up in front of you. He has a magic fingernail that hypnotizes you so you can't move once you see it. The finger slowly comes up to your nose, touches the rim of your nostril, then he sticks his other finger up through your anus and out your nostril and uses his anal/nasal pinch power to pull you down into the toilet.

i heard that if you sit on a toilet alone in the dark and say bendyman three times, you'll feel something tickle your butthole. then you have seven days to murder you're famil or else you'll develop colon polyps. 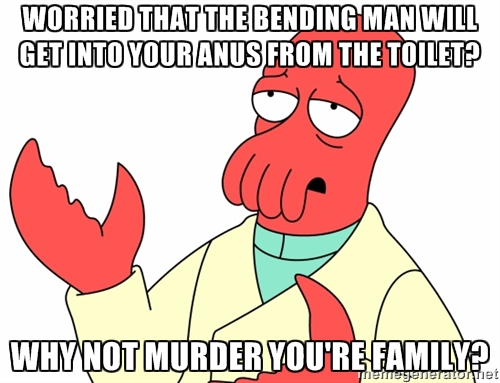