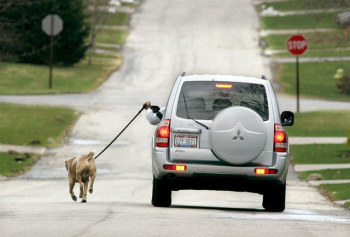 Maybe not a complete failure of humanity, but it is odd, and outdoors. I was at Fedex dropping of a package and saw a hambeast revolving around the parking lot of the adjacent building on her smoke break, then go inside with her cigarette still lit, and still smoking it, right past the four ashtrays at the door and around the lot. Now, not so odd, but even if there wasn't a 50 foot radius of no smoking near public doors in my city...

It was a blood bank.

In the small town where I live, there were a few (five or six) 14-15 year old kids who decided it would be the height of awesome to dress up in full ninja costume and ninja the hell around downtown. They would run around the buildings, hiding behind decorative shrubbery, do cartwheels down the sidewalks, and generally just be as ninja as kids in black pajamas and masks could be. No kidding. I thought I was hallucinating the first time I saw them: just flailing around like autistic monkeys on the sidewalk before they darted down a side street.

They were pretty notorious for a few months, until one of them jumped out a little too close to the road and caused a minor accident when they surprised a passing driver.

I never met any of our hometown ninjas in person, but I'm going out on a limb here and saying that they were prime examples of humanity's failure. Either that or they were completely amazing.

I was riding in a car on the highway in traffic. We see a two fat fucks, one male and one female pulled over on the side of the road. They were standing between their two cars and pummelling each other brutally. I assumed it was some kind of road rage incident but we were moving at a steady enough pace where I didn't have an opportunity to ask them why they were beating each other senseless.

One time I was at a small hardware store where the only other occupants were the store's owner and a dad with his young son. The kid picks up a hammer and starts playing with it, the dad sees this, rips it out of the boys hand, and somehow manages to clunk himself in the forehead with the hammer. He dropped like a stack of bricks while the store owner called 911. It was more like an accident, but it seemed pretty stupid at the time.

Back in '87 my dad took my brother and I to McGuire Air Force Base here in New Jersey for the annual air show. They had a row of aircraft lined up as static displays in addition to the aircraft that did aerial performances. One of the static display aircraft was a US Navy TA-4 Skyhawk, the trainer version of the famous light attack aircraft.

It was an incredibly hot day, as I remember. So hot, in fact, that they kept making announcements over the PA to drink lots of water and get in what little shade there was whenever possible. Some dumb woman decided to set up a chair under the Skyhawk, which was no problem for the pilot and ground crew at first, as she was just sitting there to get shelter from the sun. However, she was sitting next to the rather large fuel tank strapped to the plane's belly. Then, once she was situated, she lit a cigarette. Thankfully, the only thing that exploded that day was the pilot who ran over to her screaming to put the cigarette out. Pretty scary shit when you're almost 9 years old and less than 10 feet from a near disaster.

This was about four years ago. I was sitting in the car waiting for my wife to grab something in a craft store. This woman came out carrying a kid about two and with little girl about six or so behind her. The girl was screaming so much her face was red. She wanted something in the store and the mother had said no. As they were making their way across the lot the six year old picked up a rock and chucked it. Direct hit to the base of the mother's skull. She went down on top of the two year old and wasn't moving.

I ran over to help and possibly call 911 and she started to get up. She thanked me then turned to the six year old. All i could think was how my mom would beat my ass for such a thing. She just looks at the kid and says "You must have really wanted that, lets go back inside and get it for you". Fucking phenomenal.