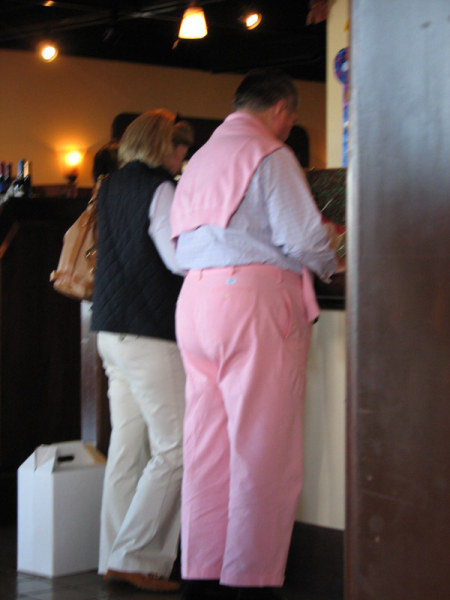 That sweater is just too small, big man.

I'll go ahead an post the story about some genius boy scouts. While I was at Philmont - a big ass summer retreat in New Mexico - I was told of this genius trek group who really wanted to see a bear. Rather than keep a keen eye on the forest like normal people, these guys decided to dump all of their Gatorade mix packets all over their campsite. Everywhere. Come next morning there's two bears and all their camping gear - stoves, trash bags, pots and pans - have been fucked the fuck up by huge bear claws. And the retard scouts didn't stop there. Most people by now would realize how stupid of an idea they just pulled off and waited in their tents and let the bears run away; not these people, they called the staff of the camp to come shoo the bears away and promptly kick these guys out of the ranch (and of course tell every soul they came in contact with about these guys).

My wife took my son to one of those play gyms when he was around 8 months or so, still crawling but could pull himself up on things.

This little shit of a girl walks up to my son while he was on the ground, looks my wife directly in the eyes and slowly starts to bring her foot down to stomp on my son! My wife kicked the girl's leg out of the way (wasn't in arm's reach), gently mind you, and basically told the girl that it's not a nice thing to do. The mother actually told my wife off for stopping her child from stomping on mine THEN proceeded to spur her daughter on to continue to try and stomp on my son again!

She got hers in the end though. After a while of this shit my wife got sick of it, grabbed the girl and told her that if she continues to try she'd call the cops and they'd take her away forever and she would never see her family again.

The mum had to take her daughter home because she couldn't stop her from crying hysterically.

My own story hails from Wisconsin, home to far too many fatties. I was up there from Chicago for a weekend out on some random lake with friends and such when we decide to get some food and groceries for the trip at a local Pik 'n Sav. We pull up and park and whatnot, and as we walk in, we see a man who I firmly believe is the fattest you can be and still be able to walk, eating mayonnaise. Out of the jar. With his hand. Scooping it into his mouth.

I walked past the site of a car accident today. All but one of the southbound lanes were closed. Two cars swerved around and honked at each other in a right of way dispute. They both pulled over. Both drivers got out and started yelling at each other. One guy kicked the other guy's car and got back in his car to drive away. The other guy grabbed the first guy's license plate as he drove away so that it broke off. They were still yelling at each other at the red light.

My husband and I tried to go fishing once. Next to us was the Family From Hell. There were three kids who threw trash and each other in the water and were generally really awful. The mom screamed at them non-stop, which didn't stop their behaviour at all. Dad sat there looking utterly defeated.

I went for a walk around the lake and heard the woman scream, "YOU FUCKING ASSHOLE! I HATE YOU AND WANT A DIVORCE! YOU NEVER HELP WITH THESE GOD DAMN CHILDREN! WE'RE GETTING A FUCKING DIVORCE!"

They kept screaming and fighting for at least an hour and didn't care that everyone at the lake could hear them. My husband and I left to go fish elsewhere.