Monday, Aug 02, 2004 by Ryan "OMGWTFBBQ" Adams
Last week forums Goon Slo-Tek was given some slides from his father, a member of the United States Navy. Slo-Tek scanned them all, then fixed what few color issues there were. The results are amazing, and the photos are powerful. At the end of the article, there will be links to desktop wallpaper sized images. I'd like to show you all a side of Something Awful that you don't get to see too often.

My sincere thanks go out to forum Goon Slo-Tek for posting the pictures and to Dr. Robert Reiheld for taking the pictures, posting comments on each one, and for his service to our country. 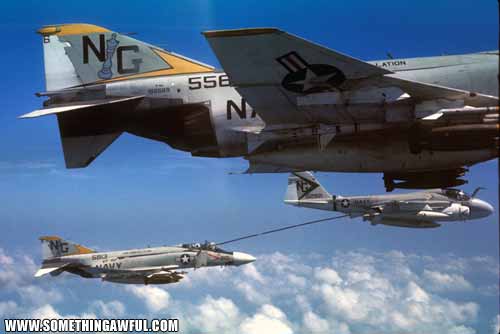 Two F-4s refuelling from an A-6 converted for tanker use. The Navy uses the basket system because it works well with relatively small tanker planes that they can launch from carriers. The Airforce boom system requires a man in the tail of the tanker to control the boom, but transfers more fuel faster. 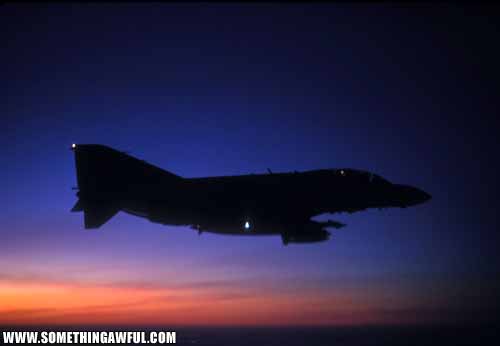 F-4 by sunset over "Yankee Station". This was the standard carrier operating postion off North Vietnam. As opposed to "Dixie Station" off South Vietnam.