H-E-L-P, help me, come on you frigging dorkuses, help me.Hey dipshit if you are reading this send help to Denali national park. Apparently the lazy ass rangers are too busy busting nuts in each other to bother to send a crane helicopter to rescue somebody who pays taxes sometimes. I want you to know that I am alive but I need a crane helicopter or something to winch me the fuck out of here. On a dare I made with myself I borrowed Todd's FJ cruiser and rolled it off an ice bridge in Denali. Somehow the moron park ranger sicko fucks didn't put up a sign about doing jumps off the glaciers which is required by law and now I am trapped under Todd's stupid car.

Oh you better believe I plan on suing. I already lost a four-wheeler doing burnouts on lake ice because of failure to put up signs about doing donuts. I am going to hit them so hard with wrongful signage of natural ramps lawsuits that I am going to have seed money for my operation to cook meth for the ice road truckers. I will finally be able to compete with the French Canadian meth gang headed by the mysterious figure Descartes who also drives around in an FJ cruiser and is supposably really good at snow machine riding.

Dang, wait a second, I just connected the dots. I think that lactonic motherfucker Todd Palin might actually have put a camera in the downstairs bathroom at the Palin house. Last time I got visitation on Turp I swear I saw a camera in the vent pointed right at me while I was trying to push out a four day oxy loaf. Whenever I get that bitch I am going to yoke him so bad his guts are going to swell up and everybody will think he is grimace. First he films me in labor with a brown baby and now he entraps me to stealing his shitty car with no ice traction. 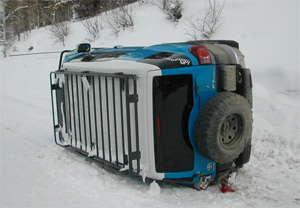 Will this be my final resting place?Anyway, I think my legs are crushed by shitty debris at the bottom of this gay ravine (no offfense to gays) and I can hardly move and I have been surviving off the case of coconut rums in the trunk. If I have to drink one more liter of Parrot Bay I think my unit is going to flip inside out. Also there are like 30 DVDs of dancing with the stars which raises all kinds of questions like who buys dvds and why do they put dancing with the stars on dvd and why are these in your car todd. That's no kind of party nobody wants to be involved in.

Oh, also, I must solemnly report the death of my drinking buddy Tucker. I am going to start eating him pretty soon starting with his fingers because they look the most like taquitos and I frigging love taquitos. I remember in school they talked about the Donair party which sounded like a party almost as bad as todd's coconut rum dvd watch party.