A beef magnate wakes up in the body of a cow. He is powerless to make himself understood as he is herded into the abattoir.

4 chefs are competing on a cooking show where they have to prepare three courses, each time using a basket of mystery ingredients. At the end of the show, it's revealed that they were cooking themselves the entire time. Also the judges are aliens. 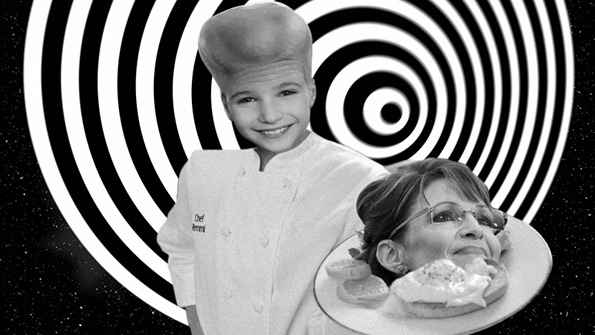 A young alien boy dreams of becoming a renowned chef after his civilization has conquered Earth and written the bestselling cookbook "To Serve Man." After years of training at an alien cooking academy where he perfected the art of cooking humanoids, he goes to Earth only to realize that "To Serve Man" is about helping humans instead of cooking and eating them. It's not too sad of an ending, though, because the other aliens still let him cook Sarah Palin.

A race of advanced aliens arrives on earth to share the secrets of the cosmos, but nobody takes them seriously because their faces look like human butts.

A dancer injects concrete into her butt so that she can have a big butt like her idol. It works out well at first and she becomes highly sought after for rap videos, but to her horror she learns that the concrete in her blood is slowly turning her to stone.

She ends up as a statue in a fan's private collection. She is mounted opposite a TV that shows her best music videos on a loop. A close up on the statue reveals that it has shed a single tear.

A hardcore Apple fan uses underhanded methods to be the first man in America to get his hands on the newest iPhone, weeks ahead of the official release date. Unfortunately for him, the phone is cursed. Its autocorrect feature alters all his messages to say horrible things, and its built-in navigation system only takes him to horrible places.

These bugs are fixed by the time the phone is released in stores, but because the man got his phone illegally he is not eligible for software updates. He can't use his illicit contacts to help him either, because his horrifically altered texts alienated them as well as all his friends and family. He tries to drive to their houses to apologize in person, but the navigation program routes him through a high-crime neighborhood, where he is murdered for his new iPhone.

The mugger begins experiencing the same problems with the evil phone and the cycle begins anew...