In just a couple days, Dr. Who will air its Christmas special, in which Santa Claus (the portly cop from Hot Fuzz) helps The Doctor and his companion battle oozy aliens. That's a real episode. By contrast, Applewhite's fake episodes are quite silly. But the SA Forum Goons enjoyed this glimpse of an alternate universe where Dr. Who is dominated by ridiculous storylines and goofy guest stars!

The Final Death of the Daleks: The Daleks realize that even The Doctor can't be everywhere/when at once, so they concoct a scheme whereby they invade Earth at all points in time; past, present, and future, simultaneously. There is a quick montage of scenes where all The Doctor's friends across history, the lizard lady, Van Gogh, various queens, Churchill, and Donna's family look up at the sky as Dalek warships arrive overhead to blot out the sun. Things look bad for a while, but The Doctor is eventually able to find the paradox engine that is keeping the invasion stable and reverse it, thereby turning the very existence of Daleks into a paradox, causing them to be destroyed throughout all time and space, explicitly including ones hidden in pocket dimensions, space paintings, refractory crystals, "null zones," prehistoric retroviruses and "anywhere else they might be hiding that hasn't been named."

The Doctor says "It's over, the Daleks have finally been destroyed and they're never coming back!" The closing credits stinger is a scanned .PDF of a notarized document signed by the president of the BBC stating that the Daleks have really been permanently destroyed. 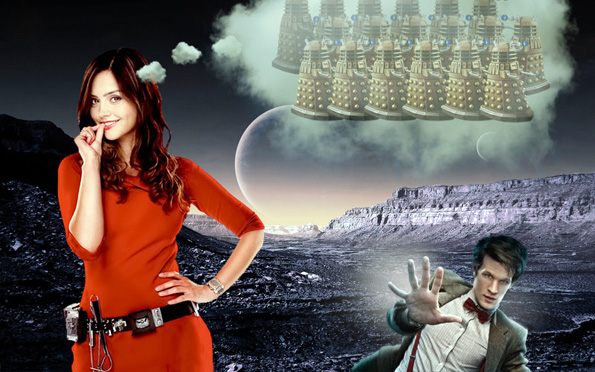 The Dream of the Daleks: Clara learns of a planet where imaginary things can become real and wants to go. The Doctor refuses, stating "there's nothing more powerful than your imagination... or as dangerous." But Clara reallllly wants to go and finally wears The Doctor down. When they arrive on the planet, things go well at first until Clara accidentally imagines some Daleks. This wouldn't necessarily be a problem, as the imaginary manifestations are supposed to have a temporary existence and cannot leave the planet, but the Daleks trick Clara into imagining a machine that can make temporarily real imaginary things permanently real. The Daleks escape the planet to rebuild their empire. The Doctor is very cross about this.

Golden Grahams: Gold-plated versions of Graham Chapman start popping up all over England and causing mischief. It turns out the late Python star downloaded his consciousness into golden duplicates of himself in a bid for immortality. Something went wrong though because the robots are now hunting down and attacking his former castmates! Guest starring all the surviving Pythons except for Terry Gilliam, who is implied to have been killed offscreen. The other Pythons are killed in humorous ways that reference their most famous bits (John Cleese is found stiff with rigor mortis inside a giant birdcage). The Grahams are eventually stopped by trapping their programs in a never-ending sketch that the Doctor co-authors with Eric Idle. Idle is the only Python left alive by the end, where he serenades the Doctor with one of his signature zany songs. 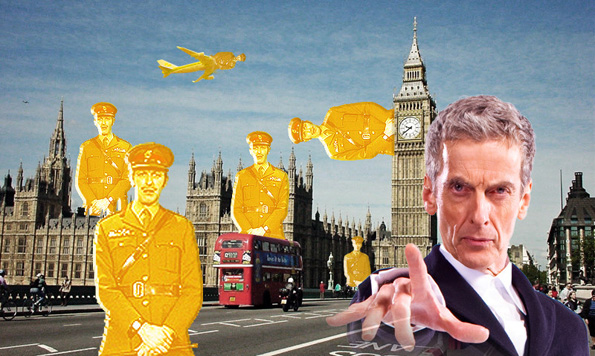 The Last Golden Graham: The Doctor and Clara receive a distress signal from Eric Idle. It turns out that when they shut down the golden Graham Chapmans in "Golden Grahams" they missed one! The rogue robot is acting out its final order to reunite the Python cast, reviving Idle's murdered castmates as Frankenstein Monster-esque abominations! The Pythons are naturally put out at being undead, but still manage to make a few pithy remarks. The undead comedians are being held hostage by the last Golden Graham, who has set its sights on acquiring Idle to make the cast reunion complete. The Doctor, Clara and Idle break The Pythons out of captivity, but when the group stops running long enough to take a breath, they realize Idle somehow got left behind!

After some comedic bickering over whose fault it was, the group breaks back into the Chapman-bot's hideout and disables the rogue robot for good. Unfortunately they arrived too late: A Frankenstein-ized Eric Idle waves sheepishly at them from the operating table. The Doctor apologizes for his failure, but Idle and the other Pythons are surprisingly upbeat; being dead has given them a new perspective on life! The episode concludes with a montage of photos from the Pythons' reunion tour, including a funny shot of a dog running off with Michael Palin's head, and one of Cleese's legs flying off into the audience during the "Silly Walk" skit.

Cars on Mars: The Doctor and Clara travel to Mars when Clara remarks that she has never been. When they step out into the Martian wasteland, they encounter a very strange sight -- a mint-condition 1960 Corvette convertible! The Doctor gushes a lot of car facts and marvels at how perfect it is. Unable to resist the temptation, he climbs in and starts the engine. Clara reluctantly climbs into the passenger seat and the pair goes for a spin around the Martian landscape, hooting and hollering with joy. They are startled when they suddenly crash right into the horizon!

An irate director yells "cut!" and it's revealed that The Doctor and Clara have stumbled onto a film crew that is filming an action movie on location on Mars. The Corvette was one of many classic cars that were to be used as props. The Doctor and Clara apologize and stick around to see a few cheesy scenes being filmed (a bare-chested hero pretends to shoot rubber-looking aliens while making quips). The film is called "Princess of the Martian Monsters."

Things take a dark turn when aliens who resemble real-life versions of the cheap rubber costumes appear on set and begin attacking people and smashing set pieces. Of course the actor playing the hero turns out to be a coward, but the actress playing the princess acts brave and determined. With her help, the Doctor and Clara are able to bring a halt to the monsters' rampage.

In the end it turns out the monsters were upset that the Director was using their likeness without permission, and all is forgiven when they are cut in for a percentage of the film's profits. As they leave, The Doctor intimates to Clara that he feels guilty about pacifying the monsters that way because he is sure the film will be a box-office bomb.