After overhearing a man's prejudicial comments on race, an old gypsy woman decides to teach him a lesson and curses him.

The racist man awakens in a world where whites are an oppressed underclass and blacks, together with other former minorities, wield the majority of wealth and political power. After a harrowing day of experiencing life as a second-class citizen, the man begs to be released from his torment. He awakes from the nightmare and the gypsy woman asks him what he's learned. He tells her he's learned that it's more important than ever that minorities be kept in their place because he's seen the terrible consequences of allowing them to have power.

The gypsy woman awakes in a cold sweat, having learned a valuable lesson about the dangers of teaching people magical lessons.

An ordinary Austrian man crosses a gypsy woman and she curses him to become "the most hated man in the world." That man was Adolf Hitler.

The gypsy woman reflects on her folly as she dies in a concentration camp. 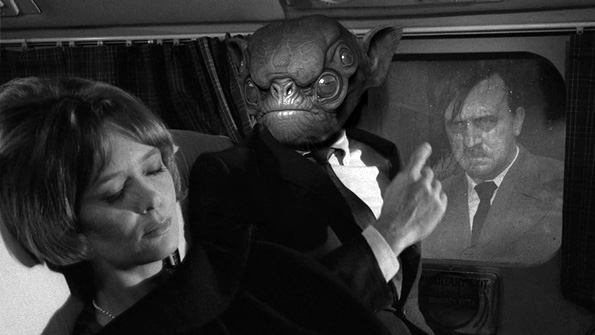 A monster sees Hitler on the wing of a plane. Who is the real monster?

A young psychiatrist from the far future travels back in time to witness the events that caused Hitler's rise to power, firsthand, in order to fully document the events and conditions that lead to the creation of one of the most evil men in history. His goals are an attempt to better understand and prevent the creation of evil.

However, while traveling with a young Hitler on his way to an art school he causes a small misunderstanding that results in Hitler being stabbed to death.

The psychiatrist then realizes that in order to protect the timeline and preserve history, he'll have to be the man Hitler was destined to become.

The philosophers say the road to hell is paved with good intentions. Just ask Dr. Montag, a man who once dedicated himself to the understanding of the nature of evil but is now forced to silently live in infamy as history's greatest monster. A road to hell, that crosses through, The Twilight Zone...

A man finds a magic typewriter that whatever you write about, the opposite happens in real life. Young Adolf Hitler discovers this too late after writing a self-aggrandizing novel wherein he becomes a hero for saving the lives of millions of Jews.

A typewriter repairman finds a magic typewriter that causes whatever is typed on it to happen in real life. After playing around with it and accidentally causing serious mayhem, injury, and even a death, he decides it's far too dangerous a thing to exist. As he types "...and then the typewriter shattered into a million pieces" it explodes, filling his body with deadly shrapnel.

Moments later, Hitler walks into his shop, looking to buy a typewriter. Seeing the carnage, he leaves, and the Holocaust never happens.

A man is convinced everyone is going to die. No one believes him. As it turns out, we are all mortal and will die someday.

Thanks to Your Dead Gay Son for the theme, Vastarien for the images, and GBS for the ideas!