Ah finally we have come back to the horrible Asian MMO market! This time I force myself to play ASDA Story; a cartoony game that emerged from the bowels of Korea. ASDA Story had one feature that other vanilla Korean MMOs lacked: soul mates! That's right! Not only can you mindlessly grind your pathetic life away killing mutated animals but now you can do so with the companionship of someone equally depressing!

Uncle McDuck wants to show you his van.I almost did not review ASDA Story since I couldn't get it to realize my video card could actually handle the extreme graphics engine. Do "game developers" hate the 8800GTS or did Nvidia just give up half way through writing the newest drivers? The blame has to go somewhere and since my video card can handle Crysis, Unreal Tournament 3, and just about any other game thrown at it, I have to blame poorly designed MMOs.

After uninstalling, re-patching, reinstalling, sacrificing a cat, and reinstalling the game once more, ASDA finally had enough pity on me to run. I don't think I have ever tried to play a game this badly that I didn't give a shit about in my life. In fact, the only reason I went through all this trouble had to do with the soul mate feature and a section on the game's website fully devoted to people who found it necessary to take pictures of themselves and beg for someone to be their friends. So basically I could have saved myself a lot of time and trouble by just writing a review of MySpace.

Character customization is as diverse as a KKK meeting but they do allow you to mix and match five different costumes. It doesn't really matter what you pick as every single costume makes your character look like he just finished marching in the gay pride parade. Talking about clothes, ASDA Story employs the extremely annoying "feature" of making armor gender dependent. I can't tell you how many times I found some boots, gloves, or pointy-tit bras that I could not use because I made the fatal mistake of creating a character with a penis. I am not sure why the developers felt it necessary to divide armor by gender since it would be just as easy to have a different graphic for the same piece of armor kind of like any other game that exists.

Quests consist of two varieties in ASDA Story and both varieties piss me off. 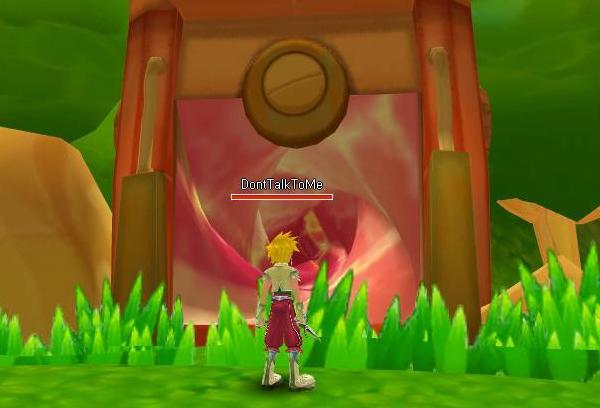 Somehow I completely neglected to take advantage of the game's driving feature, soul mates. In fact, I only made it to level six before finding a cave which resembled a vagina which seemed somewhat fitting seeing that this is the closest most of the player base will get to one. Though I never had a soul mate (or tried to get one) I can only speculate that the feature sucks. All too many times I have grabbed a friend and said "Hey friend of mine, lets level up characters together in a video game!" only to hear in response, "I am calling the police." Though I did not directly experience the joy of having an internet soul mate, the feature still proved to contribute to this article.