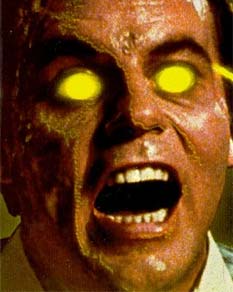 R-Lo utilizes the power of the Manna Crystal to bring Something Awful back online.The incessant workhorse R-Lo has managed to resurrect the briefly deceased corpse of Something Awful using nothing more than his slavish devotion to the site and you, the fan, and perhaps a bit of voodoo chicanery. We had planned a grand finale for Project: Go Away - one I will not reveal in case we get lazy and decide to blow off the dust and use it at a later date - but the series of terrible events that befell SA preempted it. Lowtax has a tireless attitude about his site that I feel many of you do not fully appreciate. In an effort to explain this to you I have kept a careful log of his activities on the night of the server outage.

The Night of Terror and Server Outages

10:07 PM - The Server is overwhelmed by a massive power surge, destroying the hard drive and deleting the entirety of Something Awful. This somehow also triggers a fire in Lowtax's kitchen, burning him severely and ruining his new Formica table.

11:58 PM - Lowtax returns from the hospital suffering from 3rd and 2nd degree burns over roughly half of his body. Constantly immersed in a saline bath, he begins work on reconstructing Something Awful from fragments of data.

1:09 AM - The forum is hacked by master hacker "c4lid00d", rendering the nigh impenetrable security of the forum ineffective and stabbing with vengeance into its kernel. He changes everyone's user name to Faggy McFaggot. R-Lo weeps and shuts down the forums as well.

2:10 AM - Rich realizes the money has run out on the Something Awful server and travels to the 24 hour blood bank to donate raw plasma in exchange for credit on his paypal account. His devotion to the fans is absolute, he must get the site running again.

2:50 AM - Desperate, Rich comes to the conclusion that he needs the help of multimedia programmer Zer0 Gemini, who he was working with to develop a site. He calls the elusive Gemini on his cellular phone (one of several) but Gemini is busy hanging with the elite design crowd in the Viper Hut at the Nuevo Ricardo in Florida and misses out on the call. Rich is on his own.

3:40 AM - The crystal meth wearing off, R-Lo sinks into a nightmare clouded sleep despite the fact that Something Awful is not yet fully operational.

6:30 AM - Wracked with terrible prophetic dreams and horrified by the state of his site, Rich wakes and contacts shady underworld operative Pablo Sanchez, who is willing to provide him with the needed capital to fully resurrect his site in exchange for his use as a "mule". When Lowtax asks the devious drug lord what a "mule" is, Sanchez holds up a condom filled with black tar heroin and points to a map of Texas. An understanding is reached and Richard spends the next 5 hours moving heroin and cash back and forth across the Mexican border.

NOON - Rich relaxes in bed, nursing a painfully enlarged lower intestine and half of a club sandwich. He uses the money from his dealings with the nefarious Sanchez to purchase a Manna Crystal from ebay. This will hopefully provide him with the psychic energy needed to rejuvenate Something Awful.

4:30 PM - Tired from playing Grandia like a goddamn tool, Rich adjusts his "Hit Point thumb" and answers the door to find his Manna Crystal arrived hours ago with the mail. He immediately ties it to his forehead as instructed and concentrates on bringing the site back up.

4:36 PM - The power of the crystal, amplifying R-Lo's latent psychic energy, resurrects Something Awful. Zack laughs and calls him Faggy McFaggot. Rich then forces him into a brief coma by using his newfound "Scanning" ability.

In all seriousness, I had probably even less to do with the site being back online than I mentioned in this little "hilarious" timeline of events. Thanks Lowtax, you make me want to be a better man.

In case you missed the update yesterday and are unable to scroll down, or we have been horribly teleported into the future where there is an update above this one and you would have to search the archive to see yesterday's update: Lowtax has released his Dance Dance Karnov tracks as MP3s. A lot of you requested these so you have no goddamn excuse not to download them this instant!

I see you trying to come up with excuses, but frankly we still don't know which one of you ingrates violated the sanctity of the forum, so you had better at least pretend to make nice and go download these songs. They are happy fun times, or some equally humorous parody of Japenglish. Shit, just download them or I lose my Something Awful pension, okay?

The Awful Link of the Day