One important thing to know about posters on the Something Awful forums is that everyone on it is a big nerd who wears a cape and pretends to be a fancy magic wizard. However, in a massive coincidence, this one forum thread is full of ACTUAL fancy magic wizards - and evil ones, at that! Wow.

if ur an evil wizard post in this thread about the spells you cast and other things like that.

personally for me i like to make potions that turn people into skeleton monsters that obey my every whim.

First off, true wizards are above arbitrary labels like good and evil. Second, you need to clarify if you meant specifically wizards only or mages in general such as warlocks, witches, and sorcerers. Third, you mentioned making potions which makes me suspect you made this thread because you got "Baby's First Alchemy Set" for Christmas and think you're hot shit now. You clearly don't know what you're doing and are going to get yourself killed.

Welcome to our sanguinary sect of worship. Feel at home in our black conventicle as we anathematise all of those who oppose us. Don't summon the devil, don't call the priests. If you need the strength, a conjuring:

Behold the flames rise from the compass' cardinal points. Burn the sacred oil, and with the ashes you'll annoint. Arrange the symbols of the wizard and magician. Light the candles, place the parchment paper in position. Between its leaves, place the lash from a black cat's eye, a straw of a broom. Fold, burn, and, centralise.

In my opinion the good wizards are evil. *casts spell of infinite child slaughter*

I'm an evil wizard. It really bugs me that (and I know it's just a movie but still) someone couldn't just follow Harry Potter to the John and shoot him in the back with a gun while he was taking a wiz. Sometimes a simple solution is better than any magic.

I cast a spell on an English town once. Their kids' "don't grow back" teeth grew in they would rot out of their heads. I made several kilotonnes with venture capital pounds setting up a dentist above every chemist and sausages shop in town. I told the dentists to just take all the teeth out because we needed something to make expensive dentures out of.

English dentures cost a lot more because lining up human teeth in a straight row is easy. Matching the often criss-crossed lineage and history represented by a British persons teeth and often lack of half is an arduous task. 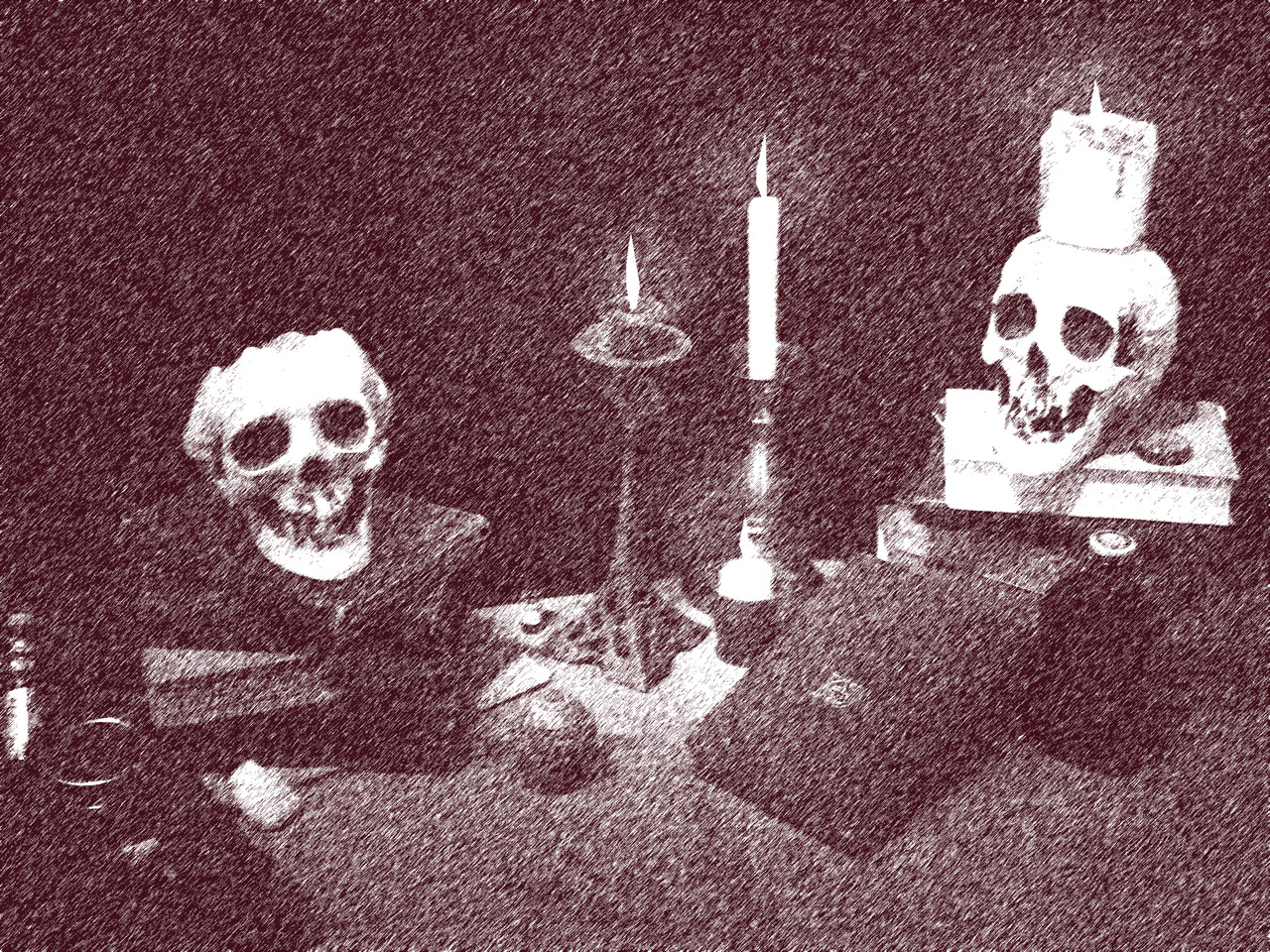 Am I an evil wizard? Maybe.

Is keeping The Law evil? Maybe.

But The Law is that which protects us from the Things Below, and I am it's Keeper. I was born of wind and farts and brimstone and slime, and I alone hold Them back from devouring you ungrateful bitches.

So anyway I made a new spell that will flay your throat if you pass on the right on the shoulder of the road, good luck with that.

does anyone have any experience with spellbooks or grimoires that drive their readers mad with the unfathomable dark power they contain? i have one and i'm trying to figure out how many spells i can read out of it before losing my mind

ive actually gotten really into melding my hexes as of late. you just store them in the very threads of your being, and just waving your hand with a truncated incantation will do the trick. very good for saving time on extra wordy or lengthy spells (think lunarmancy, heliomancy and child-slaughter spells).

think of it like downloading a few copies of Tim Allen's Home Improvement 3D onto your xbox one's harddrive to save time on loading screens.

what up my dudes, you know who you are

First off you make them out of your enemies. Second they work for MEAT.

SO: remove meat from enemies, hand them their own meat. "MEAT!!" Say the skeletons. (Don't ask me how they say anything it doesn't have to make sense).

Third, when they "eat" their meat it just mushes around their teeth a lil' and falls to the ground; base your lair in a cold climate or ice fortress and have a housekeeping spell to sweep up all the meat bits and reuse forever!

I know every lotto pick until, the war happens.

You have 76 years though of wealth daily,

i won't say what the lotto numbers are.

Also, it won't be nuclear war. Some will suggest it though.

i, myself am an evil wizared, also.

I have done the following evil:

- eat a bat
- turn into a bat
- attack someone as a bat
- blind as a bat
- dwell in darkness, like a bat
- scared of getting tangled in a womans hairdo
- drink tiny licks of blodd off of livestock
- brain the size of a bat
- have bats living in my long white beard
- lonely for the company of a female bat
- baseball bat
- often described as a "rat with wings"
- sonic navigation and hunting moths
- rabies carrier
- staff has brass bat-shaped topper