(Editor's Note: This next one is long, but well worth the read.)

DisobeyThePope: I remember my brother used to love the video game Mortal Kombat. When it first came out, all summer long he used to spend all his money at the pizza place up the street trying to get good at it. But older kids always seemed to come along just as he was doing well and beat him down. Back then we knew that the only good way to get something you really wanted that was expensive was to ask for it for Christmas. That year (I guess he was about 10) he begged and begged that all he wanted was Mortal Kombat. It would be another year before it would come out for the Super Nintendo, so he knew he was asking for a full sized arcade video game. But I think he honestly believed that if he was really really good and if he mentioned it enough times, that it would somehow happen.

For months it was all he talked about. When school started again he didn't complain one bit. He was being extra good, and plus it meant Christmas was a little closer, he'd say. As Christmas got closer and closer I tried talking down his expectations dozens of times, telling him that Mom and Dad could never afford it and Santa couldn't fit it down the chimney. But to him Mom and Dad could afford anything that REALLY mattered and Santa had fit an entire ping pong table down the chimney one year with very little evident trouble.

Well, the years went by as they have a habit of doing. We got Mortal Kombat for the Super Nintendo (gray blood and all) and eventually Mortal Kombat 2. It wasn't quite the same of course. He never went back to the pizza place to play any of the games after that year. It may sound silly, but I remember thinking he just may have been a little afraid to hope ever again after that Christmas morning.

So last Christmas (he's 21 now) I got him an arcade cabinet version of Mortal Kombat 3 Ultimate Edition (that's the one with dozens of secrets). I bought it on E-bay and got a real steal at about $500. The shipping was a real killer however at $250 in crating, handling and trucking. It's a good thing I took a day off from work to go get this thing. Because, while I knew I would need to rent a U-haul to pick it up from the hub, I didn't realize there would be customs paperwork and duties.

I managed to get it all worked out and the great colossus hidden in the garage of the people living next door to our parents house. When I unwrapped the thing of it's cardboard and plastic it looked like a dream come true. A beaten scratched sticky dream come true with the Wu-Tang clan symbol scratched into the side. Over the next two weeks it was given a complete wash down, a fresh coat of paint, new side art and a shiny new sheet of plastic for the marquee. The plastic and paint came from Home Depot, but the side art arrived just in the nick of time for Christmas. 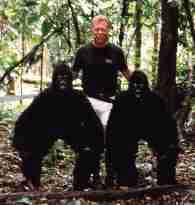 Christmas Eve, we all sat up talking until the late hours of the morning about things we'd done in the neighborhood, trouble we had gotten into. Without my steering the conversation there at all he brought up that year that all he had done was obsess about Mortal Kombat and how stupid he was. The last thing he said before he went off to his old bedroom and I went off to mine was, "It sure was a great game, though."

I have never liked getting up early but at 4:00 Christmas morning, I felt like a superhero. I leapt out of bed and dressed silently, crept out of the house just the way I used to sneak out to kiss in the park with my first real girlfriend. The air was cold, smoky and perfect. Even if I was back there running to the park to see her, I couldn't have been more excited as I tilted the garage door open and hand-carted the beast back up the sidewalk towards my parents house.

The card read: Looks like the chimney is bigger than I thought.

I have never received any gift that made me feel as good as I felt when I saw his face as he realized what I had done. All the paper seemed to disappear from it in a flash. I have to admit even I was surprised at how impressive it looked standing there like a gleaming obelisk of pubescent fantasy surrounded by golden foil in my parents living room. He laid his hands on it almost reverently and was muttering, "I can't believe it. I can't believe you did this."

Things were getting a bit dramatic for me at that point, so I switched the surge protector on with the toe of my slipper causing the screen to blink on and the familiar thrumming cadence of the theme music to drown out any sense of solemnity in the room. It took us until after lunch time to get around to opening any of the other presents. We played that game together until our eyes felt ready to fall out of their sockets. A year later, I don't think anyone who has been into the room he keeps it in has been able to say they have anything as cool.

Anyway, you want to know what I got from him that year? A leather checkbook cover. Fucker.

Daerchwing: My best friend ... oh boy. One year, he got the horror of horrors: his girlfriend got him a jumbo-size poster of a baby seal. Ultra close up. Cuddly. And the word "WHY?" in big, black letters. And some small print about not wearing fur coats.

SGTGAFSNA: A Spoon-Pin. That's right, you heard me, a motherfucking Spoon-Pin. Take a spoon, bend it in half, melt down the "spooning" part of it so it looks like a metal rod, glue pin-thing to it, voila, a fucking spoon-pin. It basically looks like you're walking around with the top half of a spoon, or possibly a fork, attached to your shirt/jacket.

OzzyOsmond: Not just one, but two, deodorant sticks. I was 13, I think.

...And we're clear. That was a painful ride indeed. Makes me happy with what I have. Sort of. I suppose. Or something. See you next week, suckas.