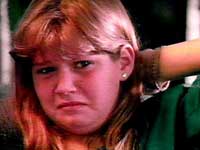 Bonk: My mother once got me a book of Jewel's poetry.

This is especially odd, because my mom's usually pretty cool and knows what kinds of things I like. Maybe one time I mentioned I thought Jewel was cute or something, so she somehow interpreted that as me saying that I liked Jewel. I guess. Or maybe she thought I was flamingly homosexual. I don't think I ever even opened the book.

Quik Stop: Your mom was trying to turn you gay. She wants another son.

IceWeasel: World Book Almanac. But this is (like the underwear) a "get this every year along with REAL presents) gift, so it's okay. I use it to plan my "what excuse do I have to drink today?" calendar.

A book which appeared to be (after much work with a Russian<->English dictionary) a listing of Oh-So-Important Politburo Members Of The 70s, written in the 70s, which I got in the 90s (either stolen or picked up free from a library), from a drunken, crackhead, five-times-divorced uncle.

Coba|t: Some hick relatives from South Dakota sent me a shot glass when I was about 12.

mike_the_bandit: A long distance phone call from one of my old, senile uncles. He yelled at me in Dutch for a half-hour.

Hinge: For Secret Santa in eighth grade I got one of those shitty magnetic "travel" chess gameboards, the kind that fold in half to keep the pieces inside and is about 6"x3" folded up. Not too bad.

Except that it had a big red "CLEARENCE" tag on it. For 99 cents. AND it was opened! AND sealed back shut with STAPLES!

Best of all: THERE WERE NO CHESS PIECES!

I was pissed until I saw that it was from the kid in class that we all fucking picked on. Seeing my friend Damien throw the chess game at him from the bus window was gift enough that year.

RusteJuxx: I get the same gift every year from my grandparents. Recycled writing paper! Its not even GOOD recycled paper. Its grainy as hell, it has a really bad green hue, and its some terrible adaption of wide rule(its bigger than normal wide rule hooray). Along with it I get a set of pencils that are the newest in down at The Dollar General Store that usually break when you hold them and come in fantastic pastel colors! I have received this same gift for the past 7 years for my birthday and Christmas.

Captain Sponge: A pale blue ladies' jumper from my grandmother.

It turned out it was supposed to be for my sister, she'd just gotten the labels mixed up.