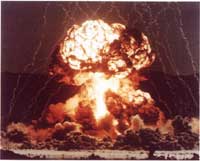 DogWorld: A Power Rangers comic book. I was like 15 at the time.

Pledio: I got the King James version one year. From three separate family members.

Quik Stop: My sister once got, for Hannukah.... a FOLDABLE BOX.

It was plastic and could be unfolded into a box ~ 2" by 4" x 8" or folded up into a strip of useless plastic.

I think that might be the worst present ever.

InvaderJohnston: My aunt, with two boys my age, got me a mickey mouse shirt when I was 15.

He was hitting a baseball.

N Usquam: I once got a Teddy Ruxpin with the batteries melted inside of it, so it was a small bear with something black oozing out of the back of it. I think that scarred me for life. "Mommy, what's wrong with it?!"

GrtWht88: The volume "P" of an animal encyclopedia, from some crazy great aunt or someone.

PainterofCrap: One of those skeevy mounted & shellacked frogs they sell in Mexico. It was posed at a miniature bar drinking a miniature Pacifico beer. You can't smoke enough ganga to make that look good

Freakoutmusic: As the person who got the foldable box, let me just say it was definitely the WORST.GIFT.EVER. At least some of the other gifts have purposes. This was too small to hold anything. And then it folded 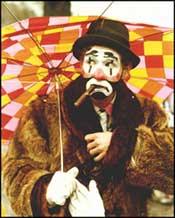 nikto: When I was 15, my cousin got me an Old Navy dog tag. It was made out of a really weak metal, and I hated it so much I broke it in half. I mean, christ.. it's a dog tag. And it's Old Navy. What the hell.

The Trickster: Both of the worst gifts were from renters who decided they needed to give me and my siblings christmas gifts for some reason. First was from this lady who would come home from work and come downstairs and just talk to us for like 2 minutes and laugh at anything we said, then disappear into her room for the rest of the night. She gave me a puzzle. One of those cardboard things with the pieces that fit onto that. Of the solar system. I was about 14 at the time. Second roommate was this bizarre asian woman in her early 20's who'd cook entire fish (as in, the whole thing in one piece) on a wok in our kitchen every other night. She gave me one of those radio shack R/C cars that take 1284782 AA batteries and have a top speed of 4 mph. I was about 15 at the time.

Spaz: A dodgy red plastic football from my grandparents, it weighed about 30 grams and the slightest gust of wind would carry it miles off course. I never played football in my life, either

NickLess: Two years ago I got this musical jewelry box from my mom. I'm a 22 year old male, btw. Also, I never wear any sort of jewelry. The worst part is pretending that i liked it. I felt really guilty about not liking it because I'm sure it had some sort of sentimental value. I just sort of put it in the corner of my closet and then forgot about it. She would ask me where it was or if I had put anything in there and I'd be like "Uhm yeah.. see. i really like it. thanks for the great present mom."

Now, every time I see it, it makes me feel guilty about every single horrible thing I've ever done to my mother. Maybe that's why she gave it to me.